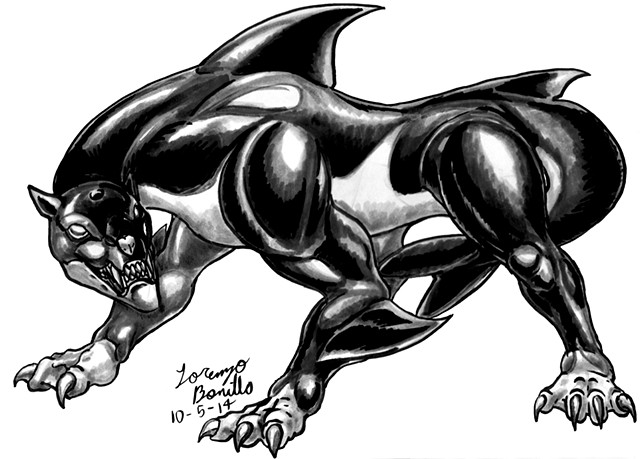 Not from the world of Avatar, a mythical beast from Inuit culture, the Akhlut. The Akhlut is a primal spirit that takes either the form of a giant white wolf, a large orca whale, or an orca-wolf hybrid monster that attacks humans and other animals. Whenever the Inuit followed large wolf tracks that led to the sea, they believed it to be the work of the Akhult waiting for their prey to come close. Often, when the Inuit people see dogs walking around or in the ocean, they believed it to be the evil Akhlut. There is very little details about the creature save for its appearance and hunting practices as not many myths regale us about the Akhlut, so any information regarding its nature and personality are purely theoretical.

Fun fact is that another name for orca is seawolf, due to the belief that the ocean and land shared variants of the same animal, like the seahorse and the sea cow, up to creatures like the monkfish and Seabees. Yes, you read that right, Seabees.

My version of the Akhlut focuses on the wolf-orca hybrid side of it. I made the body a wolf with webbed toes, but gave it the orca’s skin and fins to exemplify the aquatic side of it. The nose is vestigial, as its main breathing source is its blowhole atop its head. The ears are small, so as not to let heat escape from its body. Its lack of fur is so that it doesn’t slow down while swimming, but it possesses the wolf’s strong legs and vicious fangs.