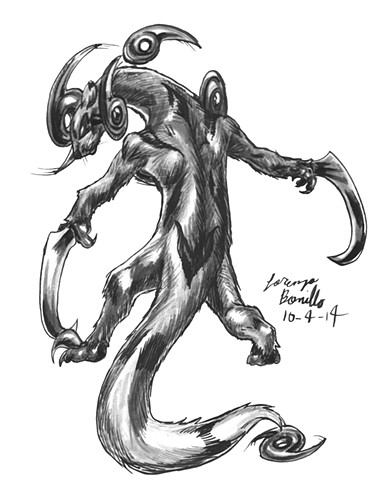 Our next creature hails once again from the realm of Japan, as a notorious type of weasel that rides the winds and cuts anything in its path. These “sickle weasels” reside in the Japanese Alps and have learned to ride the winds in the region with claws as steely claws as sharp as razor blades and with fur as spiny and as sharp as a hedgehog’s. They move so fast that they appear invisible to the naked eye as they travel the air. The Kame-itachi work in groups of three and their attacks are so quick and precise, that a person struck by them could either experience a minor discomfort or be rend to pieces without a drop of blood being spilled, all without the victim seeing the kama-itachi at all. The attack occurs like this; -The first one slices its victim’s legs, knocking them down. - The second one rends the victim with thousands of cuts using its legs. - The third one applies a magical salve to cure a majority of its injuries, reducing a series of severe injuries to a few minor cuts. The sickle weasel’s origin stems from a corruption of a term for the sword stance called the “Kamae tachi” and slowly took on the life a weasel yokai. Each region has different definitions of the kamaitachi, from being servants to an evil god or blood suckers. All agree that they move incredibly fast and have razor sharp claws/blades.

My rendition of the kamaitachi was to make the sickles a part of the hands and feet. I originally was going to give it blades around its face, but it looked too cumbersome and didn’t looking good enough. The floating spiked disks were part of a rough that I liked actually floating around its body as another means of delivering its series of vicious cuts.