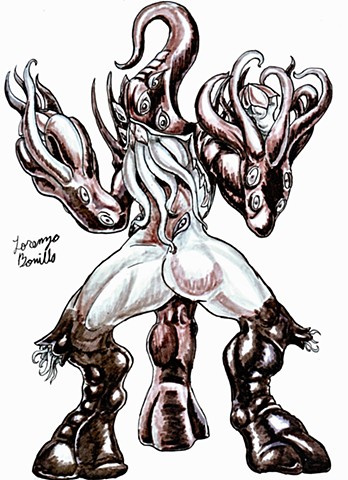 Nylarthoptheryx is clearly a nod to Lovecraft's own, Nyarlathotep. So I am just getting that out of the way first.

Now, why would I create a name instead of just drawing the creation itself? Well, I wanted to have a big demon for a Game session I am running, so I used a Cthulhu creation as a source of inspiration without all the impossibility of beating it, the insignificance of self-worth amongst cosmic horror,and the insanity factor. Well, I may keep the mental attack force as that may be interesting.

I used the artistic descriptions and heavy reference from the Nyarlathotep from both an image search and several elements from the Persona design by using the tripod legs, the tentacled arms, and a head that is essentially a tentacle. How did I differ? Well, I turned the upper half by connecting it with the tripod legs as an extension of its own mouth. Next, I turned the tentacle suckers as barbed suckers for eyes and added a split beak for the tentacle mouth. The last part is that within the tentacle forearms lie a clawed maw within for a more frightening surprise in attacks.

The Nylarthoptheryx is a high level Summons that requires the summoner to sacrifice some of their current summons and to increase their mental defense, unless they become stricken by its psychic pulse aura. The creature delivers vicious grab and slam attacks with a perpetual aura attack that weakens a summoners' control on their summon spirits, causing the spirits themselves to harm their caster. The creature's power is so immense, that the caster must dispel it after a certain length, or else their minds will be irreparably scarred and their mental acumen diminishes, causing a loss of control of spirits and risk of spirit rebellion.