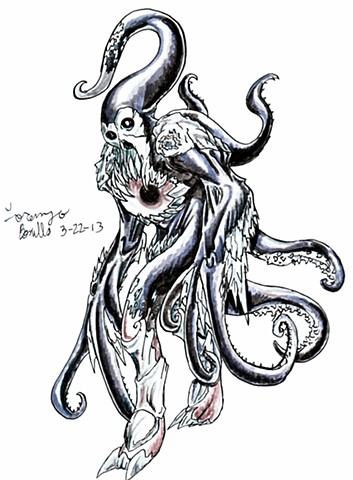 The Cephalostacean was a design spawned from my prior attempts at creating the last drawing, Nylarthopteryx.

I drew the torso and arms and then realized I didn't have a lot of space to commit to the tripod leg setup, so I mad it bipedal and added a mess of hardened shell plating over the body. My favorite touches are the head styled after Lord Death of Soul Eater, only darker, and the enlarged jewel sticking out of its torso. I played around with the tentacles and bone detail.

The Cephalostacean is a Nightmare Summon that delivers vicious damage using bone shard attacks, tentacle thrashing attacks, and firing off a pulse blast from its jewel chest that can deliver physical and psychic damage to a summon beast. This creature also has a slight chance of attacking the summoner if they do not meet its mental requirements.