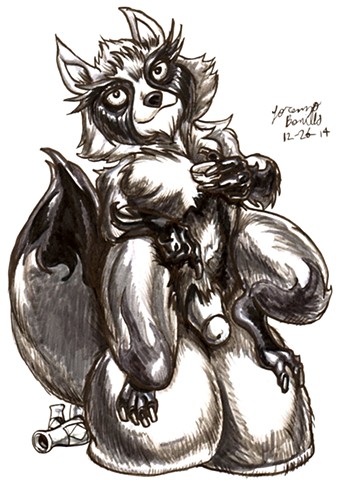 The lovable trickster of parties; the Tanuki.

An adaptation of early Chinese spirit foxes that evolved into its own breed of yokai, the Tanuki is based on the actual tanuki animal, a breed of dog that resembles a badger or raccoon that started off as a malicious trickster, yet slightly dumber entity,but since Japanese fox spirits, or kitsune, evolved into sharing divine messenger aspects to go with their mischievious qualities, the tanuki changed from menace to puckish rogue. The Tanuki possesses abilities similar to the kitsune, in that both yokai are capable of shapeshifting, can create their own form of spectral fire (kitsune with fox fire and the tanuki with tanuki fire), grows stronger with age, uses objects as a foci for transformations (kitsune with human bones, tanuki with leaves), and possession. The Tanuki, however, often spends its time in bars drinking and encouraging others to spend copious amounts of money with the Tanuki either handing out gold that will transform back into worthless leaves or promissory notes to pay a debt it has no intention of paying back.

To make the tanuki more friendly, its appearance evolved from looking foxlike to the traditional tanuki creature with a large belly while wearing a straw hat and carrying around a sake bottle. But, the most prominent aspect of the tanuki is its enlarged testicles, or balls that the tanuki would use as a parachute to dive on money grubbers. Despite the obvious sexual connotations, the tanuki’s enlarge scrotum has nothing to do with sex and actually has more to do with good fortune and luck with money. This has origins in that metal smiths in Japan used the scrotal skin of the tanuki to pound out gold into gold leaf. The metal workers would praise that the tanuki skin is so strong and gold so malleable that the gold could be stretched out to the size of eight tatami mats. Somewhere along the way, the words got switched and the thing that got stretched to eight tatami mats became the tanuki’s scrotum. Add to the Japanese term for “small bag of gold” (kin no tama) being very close to the slang term for “balls” (kintama) endowed the tanuki with a magical stretchy ballsack. The tanuki’s connection to financial prosperity also make it a mascot to restaurants and bars that its just as common to see a tanuki Charm statue outside of an establishment like the Maneki Neko, or the Beckoning Cat.

My version of the tanuki stays pretty much true to the description of the tanuki, except upon further review, looks way too much like furry art, much to my chagrin. Maybe if I left out the pupils and kept its penis small, it may have salvaged it, but it still has an enormous ballsack going for it, so I just can’t win. My pose with it is it enjoying its sake and just having a laid-back attitude going like “Oh, hey there. I’m just sitting here drinking my sake, and why yes, those are my balls I am sitting on as a chair. It’s quite comfy, thank you very much.” Or something to that extent.