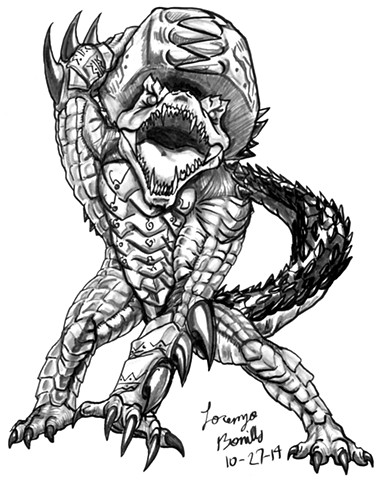 A monster with some baggage, the Buwaya. This monstrous saurian has mottled skin and has a coffin-like saddle on its back. This creature lives deep within caves under the deep sea and when it catches it victims, it will stow it’s victims in the coffin saddle and takes them back into its cave for feeding. Aside from that, the only other fact is that the creature’s name means “crocodile”. For my rendition of this creature, I took the literal look of a crocodile, though I drew it with an alligator in mind. I made the scales more elaborate with loose sections for joint flexibility and gave it a few tribal markings. For the chest, I made it more like a coffin-shaped Venus Flytrap look so that the creature has two means of ingesting its prey.