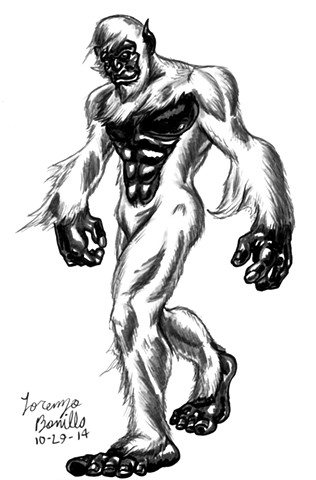 The Abominable Snowman, The Yeti. This monster is an ape-like cryptid that is said to reside in the Himalayas along Nepal and Tibet that is ingrained in the culture’s history and mythology. It is one of the most disputed legends due to lack of physical proof, but persistent belief in its existence keeps the legend going. The story of the Yeti begins as far back as the early 19th century, when a report by explorer H. Siiger, recorded the Yeti as being a part of pre-Buddhists beliefs. He heard reports that the Lepcha people believed in a “Glacier Being” as their God of the Hunt, and that it was an apelike creature that carries a large stone and that its blood is used in certain mystical ceremonies of the Bon religion. Since then, throughout the 20th century, reports of the Yeti have increased in frequency as many expeditions and explorations to find and/or research claims of Yeti scalps, encounters, and finding any evidence that such a creature exists. Though reports of the Yeti have decreased during the 21st century, there are still adventurers who venture out to find out if the Yeti does indeed exist. Perhaps as most believe, misidentification may have been the origin of Yeti as local wildlife combined with environmental factors may have led to the belief of an ape man wandering the frozen mountains, but with discoveries occurring more and more each year and new species being discovered in the most remote of areas untouched by man, and man’s ardor for finding out the unknown, we still believe that the yeti is out there, somewhere. My depiction of the Yeti is indeed the traditional stylized ape man, with white fur and darkened skin to show it blending into the snow and the darkened skin to absorb heat and to be a contrast to the furry body.

Only those who are unclouded by love, devoutly religious, or close friends and/or servants can see through the illusion and her true appearance, which will cause an alarm and once her lover is made aware of the situation, well, he may be disgusted, but the Hone Onna will still be oblivious of the situation and will continue her pattern unless steps are taken to prevent her visits. While it is possible to use wards and magic charms to close off entry to her. But, these charms are only as effective as the victim’s will is, and as she decays further, the enchanting aura she exudes becomes even more powerful, causing the victim to succumb to his desires and spends one last night of sensual bliss before losing his essence to her and joining her into the afterlife. On such story about the Hone Onna is the Botan D&#333;r&#333; that tells a story about a young man named Ogiwara Shinnoj&#333;, who is wandering around at night and who meets a young woman named O-Tsuyu. She carries a red peony lantern and Shinnoj&#333; immediately falls in love with her. Every evening now they meet each other for love and to sleep together. An overly curious neighbor silently sneaks to the bedroom of the couple to observe them. When the light of the bedroom falls onto the couple the neighbor nearly dies in shock, when he recognizes that the sleeping Shinnoj&#333; shares his bed with a moving skeleton. Another story from the Akita Prefecture tells of a young man traveling and becoming lost through a winter storm. He suddenly sees a young woman, carrying a red peony lantern, and was guided to her house. When he went to thank her, the light of the lantern fell onto her face and the man reeled back in shock upon seeing the woman’s face as a blank skull. This woman is similar to a siren and a succubus, in that both are sexual supernatural beings that lure men with their sensual allure and like a succubus, drains the spiritual essence of their lover vial sexual intercourse. The differences though, is that a Hone Onna can be completely ignorant of their undead state and therefore, unaware of their life draining tendencies, and they are generally seeking out their former lovers, whereas a succubus intentionally seeks out men to drain like a hunter pursues its prey. My rendition of the Hone Onna has a woman in a provocative pose as the skeletal half is revealed via a black illusory flame. Her dress and hair is modelled after Ragyo Kiryuin from Kill La Kill.