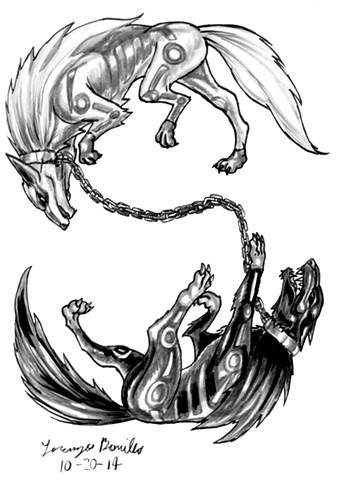 The dueling hounds, El Cadejo. These dogs are often traveling in pairs, one white dog that is good and protects travelers and one black, often akin to the Devil and viciously attacks travelers, while both are connected by a set of chains or dragging some chains, with cadejo possibly deriving from the Spanish word, cadena, meaning “chain”. It is said that the black cadejo is responsible for many travelers deaths that the white cadejo failed to protect and if someone should successfully kills the black cadejo, it is said to smell terrible for days and its body will disappear. The white cadejo is said to protect drunks and anyone at risk of robbery or murder. Legend says that when a cadejo is near, it is said to emit a strong goat-like smell. While the white cadejo protects travelers, vagabonds, and prevents people from making bad choices, the black cadejo lures people to make bad choices and gazing upon it can induce insanity. It is also said to be able to stand on its hind legs and if needed, punch people to let them know that this is no ordinary dog. Depending on the region, there are other Cadejo that can be the following; 1. The Devil himself in a form of a large dog with red hot chains, serving as a scout to evil but will not attack its victims and foretelling a sad event. The white cadejo can not stop it. 2. The usual cadejo that is a savage and evil dog that tears apart its victims after torturing them with a series of demoralizing sounds to drive the victim insane until it strikes at its victims. It will kill the victim if the white cadejo isn’t present. 3. The offspring of a normal dog and a Class 2 cadejo, making it a mortal cadejo but hard to kill. Should it die, it will rot within seconds and the patch of land it died on will never grow anything again. A popular El Salvador legend tells of two boys tasked to cut wood for a black magician, but both boys slacked off at their job and ate the man’s food and left to go home. When the magician comes home, he sees his food gone and that there is not enough wood for his fire, so he casts a curse on the boys, turning one into a black dog and a white dog. Upon returning home and getting kicked out of their village, the boys became wanderers of the land. Another legend, set in the early 1900s, tells of a guardian named Juan Carlos who lived in a thatched house amongst the country fields near Los Arcos, where he would work the fields near Parroquia Vieja until arriving home at around midnight. One day, Juan Carlos saw a white dog in the middle of the fields. Every time he would set his eyes upon the dog, it would not make a sound, shake, and leave. Juan Carlos tried to follow the white dog, without any success. Then, one day, Juan Carlos saw the white dog and began to approach it. It did not make a sound and when he touched its paw, the dog suddenly opened its eyes and said “you do not need my help anymore”. Frightened, Juan Carlos asked “What Help” and the dog said “I am a dog sent from above. My mission was to protect you from any danger. But you had showed me you do not need my help anymore.” And with that, the dog died and Juan Carlos buried him. From then, every time he came home, Juan Carlos would think about that white dog. My depiction of El Cadejo is showing both black and white versions circling each other like a yin and yang symbol and connected by a single chain, showing their eternal struggle with each other. I gave both matching markings to further illustrate the duality and giving them each a position to illustrate their personas, one angry and one chasing to stop the other.