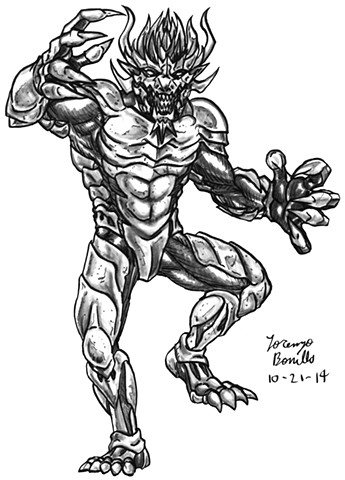 A massive horned giant, the Yehwe Zogbanu. From the West African state of Dahomy, the Yehwe Zogbanu is a massive predatory giant with 30 horns on its head and body that terrorizes hunters should they have the misfortune of entering its territory. Not very much information is given aside from those details, probably as very few survive the experience. With this much leeway on the creature, I made it a heavily armored giant that is a combination of Armored Titan from Attack on Titan and August General-in-Irons from DC Comics. The hardest part was figuring out the armor segments and especially the placement of all of its horns. Originally, I gave it hair, but later abandoned it in favor of essentially giving it a hair completely covered in horns. The armor gives it its extreme toughness and using different line widths gave texture to the plating.