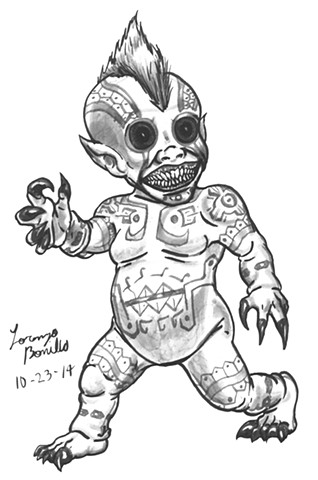 The Filipino baby monster, the Tiyanak. This vampiric creature from the Phillipines is a Changeling that takes on the form of a small child, usually a baby , that uses its cries to attract potential victims into picking it up. Once the victim picks them up, it transforms and attacks the victim, draining them of their blood. The Tiyanak also is capable of leading travelers astray and in child abduction. Another legend says the Tiyanak is the spirit of an unborn child that died before receiving sacred rites and transform into evil spirits. While the Tiyanak’s common traits are its ability to look like an infant and to lure a victim with its cries, there are different legends that vary in its descriptions of the Tiyanak. 1. The Tiyanak retains the general shape of a baby, but manifests sharp claws and fangs to attack its victims. 2. The Tiyanak is similar to dwarves, in that its “true form” is that of a wrinkled old man with a long beard, flat nose, large eyes and having its right leg much shorter than the other. 3. The Tiyanak is described in Mindoro are capable of supernatural flight while still resembling a baby. It will transform into a black bird to fly away. 4. The Tiyanak described in Pampanga are small, nut brown people who float in air and have large noses, wide mouths, large eyes and sharp voices. There are various legends that serve as countermeasures against the Tiyanak. Should you be led astray by the creature, you can break its enchantment by turning your clothes inside out that the Tiyanak would find it funny and let you go. Loud noises like a New Year’s celebration are believed to be enough to drive the Tiyanak away. Garlic and a rosary are also items claimed to be effective against the Tiyanak. My version of the Tiyanak is the baby form with demonic touches. I gave it the claws, large dark eyes, and gave it the Mohawk on its head as a form of Gremlins, while having tribal tattoos that manifest when it reveals its true form.