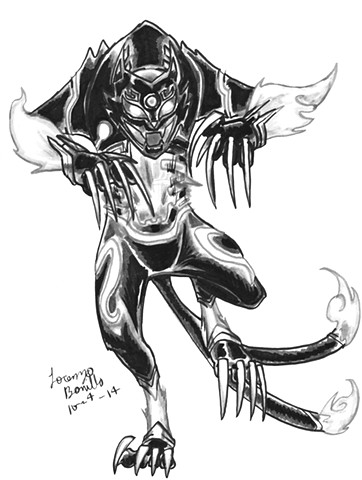 The ghoulish hellcat, the Kasha. Hailing from Japan, These beings from the bake-neko class of yokai, appear as ordinary cats. That is, until a funeral procession is held. Then, these ordinary cats transform into large bipedal felines to disrupt the funeral services, often accompanied by fonts of hellish fire and crackling lightning, to take those who have died living wicked lives from their coffins and ferry them to Hell. Though their name means “fire cart” they do not travel by any mechanical means. Other times, the Kasha just steals the corpses for their own personal amusement, such as food or for puppetry. Once the Kasha steals a body, it is next to impossible to retrieve it back, making the only means of preventing a Kasha from stealing a body is to be prepared should a Kasha come for the dearly departed. In Yamagata, some priests arrange for two funeral ceremonies, a fake one held early and a coffin filled with rocks and second real ceremony for the deceased. In Ehime, a head shaving razor is placed on the coffin as a Kasha deterrent. In Miyazaki, priests conduct a chant to ward off the Kasha and other beings that goes; “baku ni wa kuwasen” and “kasha ni wa kuwasen” (“don’t be eaten by a baku, don’t be eaten by a kasha”) and in Okayama, priests play the myohachi, a type of cymbal used in religious ceremonies to keep the Kasha away.

My version of the Kasha is to create a shadowy cat, but giving it a furnace underbelly that it uses to cremate the corpses it carries, thereby punishing evil souls by fueling the Kasha. I had a few details adorn the cat and made its face have a Cheshire grin, thank you Ultron. As a final touch, I gave the Kasha the trademark two tails that link the Kasha to the bake-neko line of monster cats.