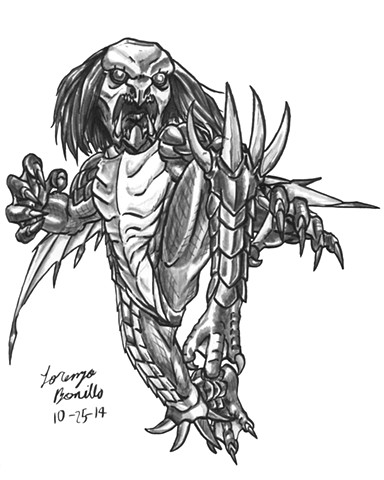 The mob boss of the Kappa group, the Suiko. This yokai may look like the kappa, but several physical and personality traits will show that this yokai is far more different than your violent or lovable prankster. The Suiko are placed as leaders amongst the water goblins, often leading as many as 48 kappa per one Suiko. The suiko in turn, report to the dragon king, Ryuga, at the bottom of the sea. The Suiko is highly aggressive and is willing to kill humans as a means to look tough amongst the other Suiko to improve their status with the dragon king, which is why the kappa kills humans as a way to look good to their suiko superiors. The suiko is quick-tempered and incredibly violent. The have incredibly tough scales and sharp, hook-like growths that resemble a tiger’s claws. They dwell within riverbanks and large bodies of water. For Suiko that lives in inhabited areas, they play pranks on people by playing the knock-and-run or possessing people to do strange things. Like all water goblins, the Suiko relishes using their great strength in challenging humans and to pull them under the water to drown them. But, unlike the kappa, who likes to drain humans of their entrails, the Suiko drains their victims of their blood and soul (reikon) before disposing of the body to the surface. The suiko is capable of magical feats, such as invisibility and possession. There are ways to ward the Suiko away from you. From placing a sickle on the side of the house and sprinkling flax seeds or black eyed peas, which the Suiko are afraid of and will stay away from the place. The one known method of killing a Suiko is to use the previously drained corpse of a Suiko victim and having a lot of patience. First, a small hut of grass and straw is built in the field. Next, you place the corpse on a wooden plank inside the hut. This will draw out the suiko who killed the person, who will run around the hut endlessy. As the body decays, so will the suiko’s, until the body is completely rotted away, killing the suiko and leaving its decayed corpse on the ground. My rendition of the Suiko is to depict it in an action pose, so I have it doing a knee strike with its spiked knees, because if you have spiked knees, why wouldn’t you use it to attack? The Suiko’s face is the lovechild combination of the Predator and the Muppet’s Sam the Eagle. Its body is given different types of plated scales to showcase the armored aspect of the Suiko, and I kept the mini-fin wings that are shown in yokai artwork.