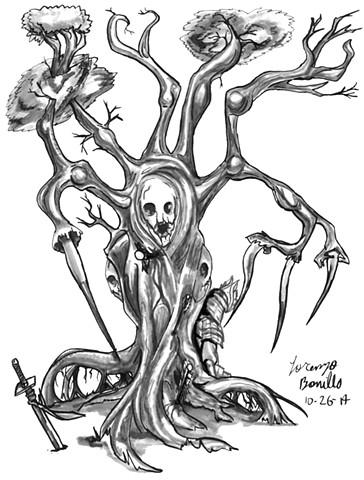 A tree born from war, the Jubokko. This tree springs forth from battlefields that have had extensive massacres and massive war sites where the blood of thousands of soldiers saturates the soil, where this tree is born. From a distance, it looks like any ordinary tree, but with an observant eye, you may notice the piles of human bones buried in its undergrowth. In fact, they were once ordinary trees, until the copious amounts of human blood it absorbed made it desire only for human blood, and that transforms them into yokai. The Jubokko waits for unsuspecting humans to pass by underneath their branches. When they get close enough, their branches transform into long, jagged fingerlike branches that both grabs and pierces the human body, draining them of their blood. They do it in such a way that the victim looks perfectly preserved after being drained of all their blood, so it looks like the victim is napping. Other times, the Jubokko leaves the remains to the birds and insects to devour, until only the skeleton remains and is quietly brushed within its undergrowth. So if you should come across a tree and you suddenly notice a pile of bones underneath the roots, well, then it is already too late for you, because the Jubokko has you right where it wants you. My design of the Jubokko is a tree with shifting leaves that are meant to have them sprout up and in, and to have the bark unfurl around its ends to allow it to transform its branches into puncture needles for draining their victims. I gave the core on each side of the tree a skeletal face for dramatic effect and added the dead samurai, sword and arrow punctures to showcase its birthplace on a battlefield, the “sleeping” victim, and that damaging the tree will show that the tree bleeds out human blood.