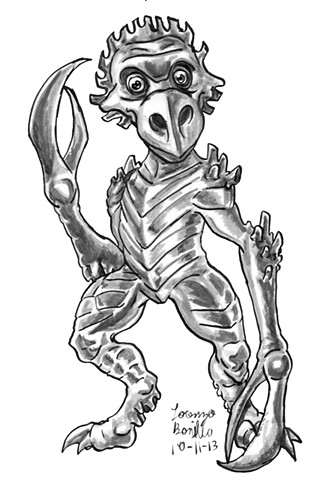 This Muppet-looking fella is a Japanese yokai called the Kami-Kiri. The “Hair cutter” is a magical arthropod (insect-like) being with razor sharp scissor beak and claws. The Kami-kiri follows a simple plan, sneaking around at night and quickly cutting a person’s hair without them noticing it. They hide under roof tiles and await their follicle victims. They attack indiscriminately, as anyone’s hair, be they noble, poor, man, woman, or child; all are fair game to the Kami-kiri. They were a menace in the past when long hair was fashionable, but not so much nowadays. A Kami-kiri’s attack can sometimes be a sign that the victim is about to marry a ghost or a yokai. These types of unions are not uncommon, but the fox yokai, the kitsune, are known to trick men into marrying them and since the circumstances of the marriage are based on improper motivations, the Kami-kiri interferes in the hopes of getting the wedding called off. There is one report of a Kami-kiri attack that was in the newspapers on May 20th, 1874 in Tokyo at around 9 pm. A servant girl by the name of Gin left her masters mansion to use the outhouse. Upon entering the outhouse, she suddenly experienced a ghostly chill and in an instant, her hair fell disheveled around her as her long ponytail was cut off from the base. Frightened, she ran to a neighbor’s home, where she fainted. The neighbors investigated the outhouse and found Gin’s severed ponytail strewn about the floor. Gin became sick from the stress of the encounter that she returned back to the countryside to live with her family. No one has used that particular outhouse again. My version of the Kami-kiri sticks pretty close to the original depiction of the yokai, with the addition of a thick skin and adding more of the ridges shown on the head around parts of its body.