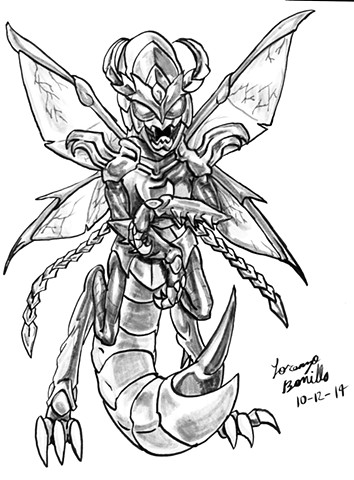 Here, we have a tiny dragon bug, the Pyrausta. This diminutive beast is an insect sized dragon from Cyprus. It has insect features and a dragon’s head, so for those familiar with the Pokémon, Scyther, there’s a mythical precedence to that creature. The Pyrausta dwells within fiery domains like the mythical salamander and will die if it travels too far from its lair. Ironically, it cannot breathe fire, but to scare off or trap enemies, it fires a sticky and smelly string shot from its mouth. It lays its eggs close by its lair and should anyone dare to intrude, gets wrapped up and saved for their offspring their first meal. Based on the scant details, I believe we can theorize that the Pyrausta have a lifestyle similar to insects in that they would have a hive mentality and live in large groups, as well as nearby an actual living fiery salamander to ensure survival . Attacking will most definitely be a group endeavor, given their small size and silken thread breath weapon. I would also think that these creatures also use a class structure in which they would have a queen, drones, and workers, with a fixation on using the European dragon idea of hoarders and have them decorate their fiery homes with gemstones.

For my rendition of the Pyrausta, I did the dragon/ insect combo with the tail being a stinger, the wings being veiny and it having loose phalanges as a false pair of legs, but can serve as long range tools for sensing and melee. The head and shoulders are modeled after Kamen Rider Gills from Agito as I felt that face best worked with this type of insect dragon.