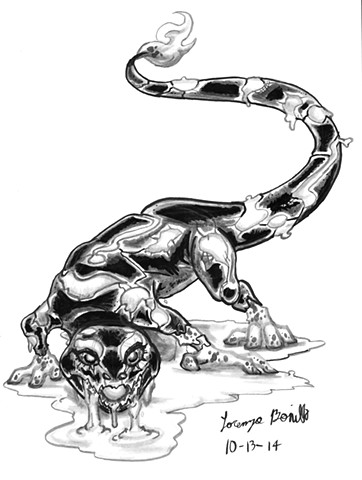 The mystical flame amphibian, the Salamander. A creature in medieval folklore that is both a mythical creature and a real creature, for such a creature is said to have flame and poison attributes, but is predominately known for its affinity to fire. It is capable of putting out, ingesting, and generating pure fire from its body. According to Fae legend, it was the salamander that taught Man how to use fire and their size varies between very small to the size of humans. Legend has it that a salamander is created when glass-blowers stoked their furnaces for seven days and seven nights. According to Pliny, this creature’s body is so intensely cold that it is capable of extinguishing fire through sheer contact, as the belief goes. As such, the Salamander serves as a popular symbol in Alchemy as a Fire Element symbol. A possible origin to the Salamander legend is based on a real salamander, the fire salamander’s sleeping habits. For the fire salamander tends to sleep or hibernate within logs that humans may have picked up to use as fire wood. Upon seeing their home on fire, the salamander would scamper out of the fire, giving the person the belief that it manifested from the fire itself.

My rendition of the Salamander is taking the fire salamander and making it a living mass of liquid magma, with the molten lava spewing from its mouth and the patterns showing exposed lava areas as the extremely cool stone shell serves as a pitch black contrast to the rest of it. Plus, the fire tail is a nod to Charmander from Pokemon.