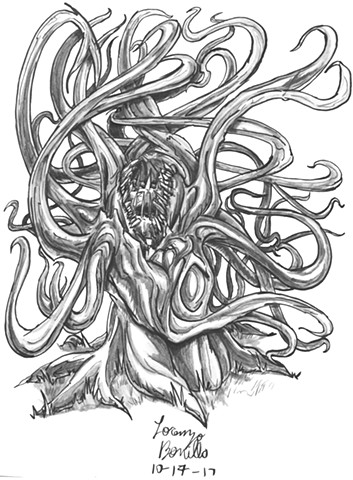 Nature that kills, the Ya-Te-Veo. Supposedly residing in Africa or Central America, the Ya-Te-Veo (“I See You”) is a living carnivorous tree with branches that behave more like tentacles than branches, or as they are described in journal accounts “like many serpents darting about in angry discussion.” Some witnesses even claim that the Ya-Te- Veo has an eye to see its victims. Natives familiar with the creature see it as a bad omen and believe it to be the work of evil magic. It mostly catches and consumes large insects, but it has no issue with taking and devouring a stray animal or human that comes within proximity of it. For this rendition of the Ya-Te-Veo, I drew it like it was a Lovecraftian horror tree creature with its whip like and serpentine branches with a mouth set at the top of the trunk, revealing several sets of teeth, one looking like a twisted human teeth and one resembling the Venus flytrap. This would have probably made The Happening a more worthwhile film if these things were around.