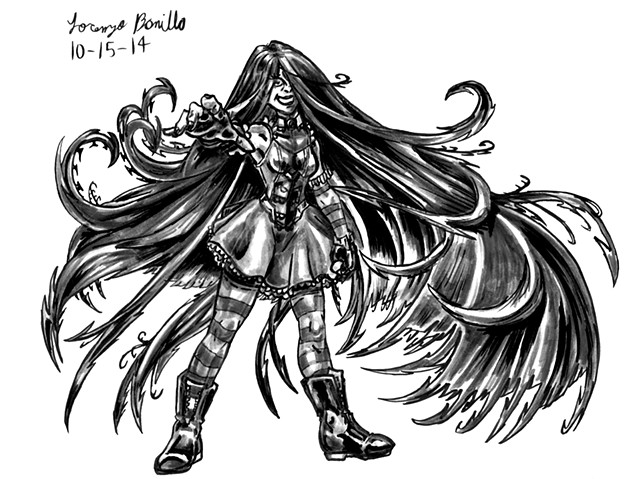 A deadly woman with deadly hair, the Hari-onago. Meaning “Hook” or “Barbed Girl”, the Hari-onago often appears at night along the roads of Shikoku Island, where in the dark, looks no different than an ordinary young woman with loose or disheveled hair. Physically, she looks like a perfectly normal human woman. But, upon closer inspection, which at that point, means it’s too late for you, you’ll see barb hooks at the end of each and every strand of her hair. She has direct control of hair and can use it as an extremely lethal and effective weapon. The Hari-Onago’s diet is young men, usually single and by themselves. She does this by prowling said streets at night searching for her targets. Upon spotting her quarry, she lures him close by either smiling at him or laughing at him. Should they laugh or smile back, she lets down her long hair and attacks them, tearing them apart and consuming the remains. That, in of itself, is very, very, metal. A possible way of avoiding the Hari-Onago is to simply ignore her, provided you can tell if a strange woman is a yokai or just a normal human. However, she is known to give chase to potential victims and it is possible to run away from her if you are fast enough to escape her barbed hair and live close by with a sturdy gate or door and can last through the night, the Hari-Onago will leave you alone once daylight comes. You’ll only have the scratches and perhaps a wrecked gate or door to deal with. At least it’s better than being torn to pieces and devoured by a woman with living spiked hair. My version of the Hari-Onago has dressed in a gothic Lolita fashion, with her hair moving around with various hooks and barb spikes moving around her as I wanted her hair to have a little transformative aspect to it to give the Hari-Onago a wide range of attacks to use on her victims.