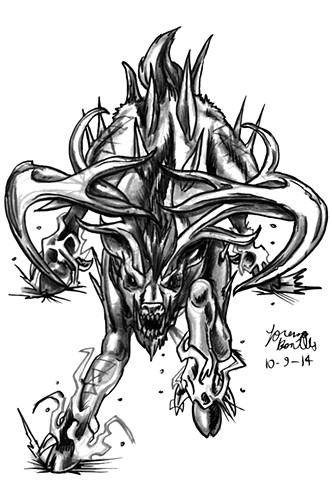 This creature belongs in a race of forbidden monsters called the Anaye, the Delgeth. The Anaye, (“Alien or Foreign Gods”) similar to the Nephilim of religious texts, are a race of giants, monsters, and horrors born through mortal woman. In the Anaye’s case, born of virgin women through unnatural means, or by a Begochidi, a trickster deity. The story goes that apparently the men and women of the Navajo had an argument over which gender needed the other more, so both genders split up to live on opposite sides of the river and whoever gave in and swam from the opposite side towards the other was declared the loser. In some versions of the story, the men lost. In others, the women lost but experimented with some interesting means of self-pleasuring which the tools used for the pleasure spawned the monster. Many of these beings were slain by the Hero Twins, Nayanezgani and Thobadzistshini, but even their might couldn’t slay them all. With the help of their father, the Sun-Bearer, Tshohanoai, who bestowed them four magical hoops to entrap the Anaye, and a terrible storm brought forth by their mother, Estanatlehi, the Earth Goddess, they were able to wipe out all but four of the Anaye. The storm, however, also reshaped the world as well. The surviving four Anaye; Cold, Hunger, Poverty, and Old Age, were allowed to live by convincing Estanatlehi, that humanity could not appreciate the joys in life, or enjoy life in general if they were destroyed. One such Anaye is the Delgeth, a carnivorous deer monster that started off as a normal deer. Well, normal considering it was birthed from a human woman, but semantics. As it grew larger, so too, did its appetite,as the Delgeth ravaged the land all around it, until it laid barren. Then, it began to consume animals to sate its ravenous appetite. Soon, the animals fled its territory that the Delgeth began to devour the clouds around it. So, Nayanezgani travels to the desolate lands that the Delgeth rules and engages it in combat. The combatants prove to be evenly matched as none of Nayanezgani’s lightning arrows couldn’t penetrate the Delgeth’s hide and Nayanezgani was quick enough to evade the Delgeth’s horns and hooves. So, Nayanezgani had to come up with a new strategy. Taking the advice of Yebitsai via gopher mail, Nayanezgani dug a tunnel to get under the Delgeth and firing off a volley of arrows to pierce the soft underside of the Delgeth, piercing its heart. As the creature died, it devastated the land further, nearly killing Nayanezgani, and some of its blood splashed the squirrels, showing why some squirrels are red. Nayanezgani used the heart as the Morning Star, the liver as the Evening Star, and its lungs as the Pleides Sky. He turned the monsters’ body into the regular antelopes we see today and kept part of its intestines as a trophy, which will prove valuable later on. This creature is akin to Fenris and Leviathan, in that they are incredibly large beasts known for their voracious appetites that their potential for devastating the land is astronomical. For my rendition of the Delgeth, I took on the difficult task of drawing an raging deer with fangs. Though the face looks more dog than deer, I made the lower jaw more full of sharp teeth as a deer’s skull has prominent bottom teeth. The horns were the second difficult task as I drew various horn types and placements until I settled on the current layout of the horns. Posing was heavily referenced from another artist, just changing the limb placement as the previous reference had weird leg layout. And the electrical sparks from its hooves are inspired by the nickname “Cloud Swallower”.