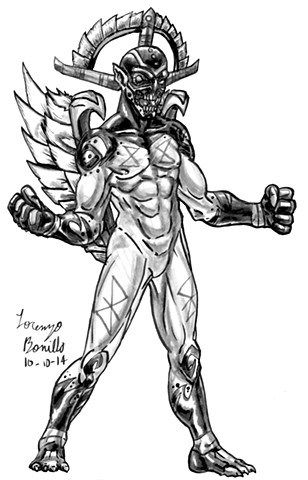 This creature belongs in a race of forbidden monsters called the Anaye, the Yeitso. The Anaye, (“Alien or Foreign Gods”) similar to the Nephilim of religious texts, are a race of giants, monsters, and horrors born through mortal woman. In the Anaye’s case, born of virgin women through unnatural means, or by a Begochidi, a trickster deity. The story goes that apparently the men and women of the Navajo had an argument over which gender needed the other more, so both genders split up to live on opposite sides of the river and whoever gave in and swam from the opposite side towards the other was declared the loser. In some versions of the story, the men lost. In others, the women lost but experimented with some interesting means of self-pleasuring which the tools used for the pleasure spawned the monster. Many of these beings were slain by the Hero Twins, Nayanezgani and Thobadzistshini, but even their might couldn’t slay them all. With the help of their father, the Sun-Bearer, Tshohanoai, who bestowed them four magical hoops to entrap the Anaye, and a terrible storm brought forth by their mother, Estanatlehi, the Earth Goddess, they were able to wipe out all but four of the Anaye. The storm, however, also reshaped the world as well. The surviving four Anaye; Cold, Hunger, Poverty, and Old Age, were allowed to live by convincing Estanatlehi, that humanity could not appreciate the joys in life, or enjoy life in general if they were destroyed. The last Anaye was called Yeitso, a massive giant who preyed upon the humans and was encased in hard scales, making him extremely hard to kill. He, in some stories, also claim he is responsible for the deserts in the North American region being that the former world was lush and full of life-giving rivers, until the Yeitso drained most of them to slake his thirst or defiled it with his waste. He is also apparently the only Anaye who uses implements as he is said to wield his own lightning bow and arrows and dons stone armor to already reinforce his hardened skin. He is also the only Anaye who wasn’t born by human women. He was instead, born of the Spider goddess Naste Estsan, who confided this revelation to the Hero Twins, Nayanezgani and Thobadzistshini, in her underground lair. She revealed that it he was born from the union between her and the twins’ father, the Sun Bearer, Tshohanoai, and in some versions, she and the Yeitso later on were responsible for spawning the rest of the Anaye monsters, like Echidna and Typhon. This part takes place after the brothers killed their first Anaye, and set out on a mission to eliminate the Anaye’s reign of terror on humanity and sought out to obtain special weapons to fight the Anaye. She reveals the difficulties of their journey to their father’s home and bestowed upon each of them two eagle feathers that granted the brothers invulnerability and compelling opponents to submit. With these implements, the brothers continued on their journey as they traversed difficult territories of living cacti, endless quicksand, and crushing canyons. They finally reached their father, the sun god, Tshohanoai, and after enduring a series of tests to prove themselves as sons of the sun god, Tshohanoai offered them various luxuries as their inheritance, but the brothers only wanted weapons to fight in their war against the Anaye. So, you can say this is where the story really begins for the Hero Twins in slaying the Anaye. After defeating all the other Anaye in a mission in the scale of Shadows of the Colossus, they finally faced the final Anaye at the Great Salt Lake area. After exchanging taunts and insults, they engaged each other in an epic battle that proved difficult for the twins as none of their lightning arrows could penetrate the Yeitso’s armor and had to avoid the devastating force of the Yeitso’s own lightning arrows. Finally, they were aided by the sun bearer, Tshohanoai, declaring that his Anaye son’s life must end, and assists the twins by blocking the Yeitso’s arrows with his shield (which is the freaking Sun, itself!) and through a combination of sun blasts and his sky horse’s kicks, destroyed the Yeitso’s armor, giving the twins an opening to finish off the Yeitson. The twins fired off four arrows in rapid succession, causing the Yeitso to stumble and reel about until he collapsed to his death. The brothers then cut off the Yeitso’s head, which caused its blood to flow forth, creating the canyons we know of today. They tossed its head and tried, like they did with the previous Anaye, by splitting up the creature’s body into a more manageable force. To clarify, the Anaye are akin to gods, and one cannot truly destroy a god unless you can transform their life force into something else. This is why the various Anaye were transformed into less harmful creatures. That is not the case with the Yeitso, as in doing this transmutation, instead of something harmless, the Yeitso’s body only created more Anayes, or in some stories, more Yeitsos. The numbers of such powerful monsters was so great, that these monsters were capable of overwhelming the entire world. This is where the storm as written above was needed to wipe out the entire Anaye race, known as the Xenogenocide.

For such an epic monster, I had to work hard in making it look imposing while regal at the same time. I played around with a few headdress designs before finalizing on the one you see behind its head and developed the body, unfortunately before finding out that the Yeitso had its own weapons and armor to add to its design, as I gave his hands, feet and head a dark patterning covering its features in a swirl of tribal body paint. The head and body were influenced by Titan forms, but downplayed the teeth and face were unintentionally made more vampiric. The facial markings started off as a hood over the Yeitso’s head that eventually evolved into facial markings all across its face. The floating wings were a final and last minute addition that I felt was necessary to make this creature seem imposing, and keeping the tradition with other Anaye creatures.