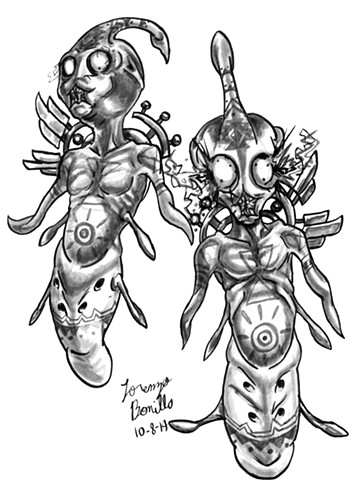 This creature belongs in a race of forbidden monsters called the Anaye, the Tshanahale. The Anaye, (“Alien or Foreign Gods”) similar to the Nephilim of religious texts, are a race of giants, monsters, and horrors born through mortal woman. In the Anaye’s case, born of virgin women through unnatural means, or by a Begochidi, a trickster deity. The story goes that apparently the men and women of the Navajo had an argument over which gender needed the other more, so both genders split up to live on opposite sides of the river and whoever gave in and swam from the opposite side towards the other was declared the loser. In some versions of the story, the men lost. In others, the women lost but experimented with some interesting means of self-pleasuring which the tools used for the pleasure spawned the monster. Many of these beings were slain by the Hero Twins, Nayanezgani and Thobadzistshini, but even their might couldn’t slay them all. With the help of their father, the Sun-Bearer, Tshohanoai, who bestowed them four magical hoops to entrap the Anaye, and a terrible storm brought forth by their mother, Estanatlehi, the Earth Goddess, they were able to wipe out all but four of the Anaye. The storm, however, also reshaped the world as well. The surviving four Anaye; Cold, Hunger, Poverty, and Old Age, were allowed to live by convincing Estanatlehi, that humanity could not appreciate the joys in life, or enjoy life in general if they were destroyed. Among the known Anaye was the Binaye Ahani, limbless twin monsters who can shoot lightning from its eyes. They dwell in a cave filled with vast amounts of treasure, which is used as a lure for would-be treasure hunters. Some stories say the eyes transform their victims into the very treasure they were seeking, and some stories say the eyes simply kill their victims. The hero Nayanezgani was summoned by the salt goddess, Ashii, to go to the Zuni Salt Lake to gather salt to aid in battle with this particular Anaye. He arrives at the cave and is invited in by the Binaye Ahani, and upon unleashing his death vision, Nayanezgani hides behind one of the bejeweled victims and let loose his lightning arrows. This battle went back and forth until he reached the fire pit. Nayanezgani threw the salt into the fire pit, causing an explosion that blinded the Binaye Ahani, and Nayanezgani slew them with a volley of lightning arrows and scalped the twin monsters. He transformed the slain beasts into prairie dogs, for their short legs and burrowing skills. And for the treasure and all its victims was scattered across the land to be found by men lured by greed.

For my version of the Binaye Ahani, I originally was going for a full limbless creature like it was wrapped in a cocoon, until I did some further research and found that they had very small, almost vestigial limbs, so I drew their arms like little wraps and made their legs stop at the knees and merged together. With the unfortunate result of the stumps looking like a penis. I did an informal poll of whether to keep the design or scrap it, but no one responded, so dick legs/dick stumps it is. I kept the bulging eyes and gave them an alien mouth with a horn and made their heads large to give them a kind of free-floating type of monster.