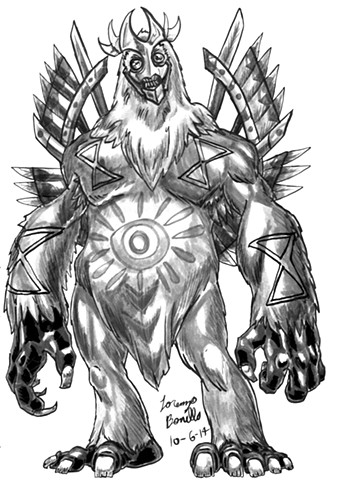 This creature belongs in a race of forbidden monsters called the Anaye, the Tshanahale. The Anaye, (“Alien or Foreign Gods”) similar to the Nephilim of religious texts, are a race of giants, monsters, and horrors born through mortal woman. In the Anaye’s case, born of virgin women through unnatural means, or by a Begochidi, a trickster deity. The story goes that apparently the men and women of the Navajo had an argument over which gender needed the other more, so both genders split up to live on opposite sides of the river and whoever gave in and swam from the opposite side towards the other was declared the loser. In some versions of the story, the men lost. In others, the women lost but experimented with some interesting means of self-pleasuring which the tools used for the pleasure spawned the monster. Many of these beings were slain by the Hero Twins, Nayanezgani and Thobadzistshini, but even their might couldn’t slay them all. With the help of their father, the Sun-Bearer, Tshohanoai, who bestowed them four magical hoops to entrap the Anaye, and a terrible storm brought forth by their mother, Estanatlehi, the Earth Goddess, they were able to wipe out all but four of the Anaye. The storm, however, also reshaped the world as well. The surviving four Anaye; Cold, Hunger, Poverty, and Old Age, were allowed to live by convincing Estanatlehi, that humanity could not appreciate the joys in life, or enjoy life in general if they were destroyed. Among the known Anaye was the Tshanahale, a feathered monster who terrorized humans. Not much is known about this one as it Anaye, as it isn’t mentioned during the Hero Twins battles against the Anaye, but it could be a creature that has aligned itself with the Thunderbirds and protects their nests. And was probably felled alongside another Anaye known as the Cliff Dweller, which killed passer bys by knocking them over a cliff to their devouring children. When the Hero Twins killed them by having them fed to their own children, the War god, Nayanazgeni turned the offspring of this monster into the vultures of the modern world, to feast on the dead and rotted.

My version of the Tshanahale is a feathered mess of monster, not necessarily a flier, but more of a brute. Its face resembles a monster chicken and is not a Navajo mask, but an altered version of the helmet from Kamen Rider Agito. The markings are Navajo in origin and the back wings are more a stylized form of parts of a Navajo mask. The story was originally going to be a small brief sentence, until I found a series of sites expanding on the Anaye creatures, so that’s how a one sentence monster ended up with a rich and detailed backstory.