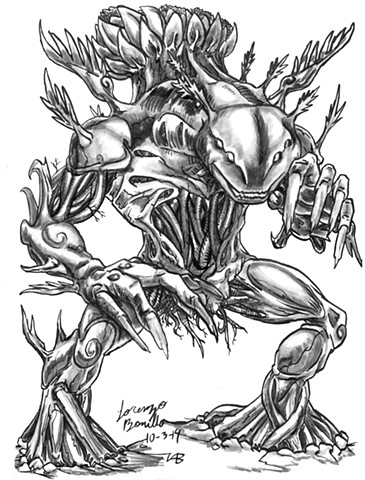 This monster is a plant creature, but don’t expect it to be Groot friendly. The Jidra is a plantlike monster from Middle Eastern mythology who is permanently fixed into the soil. This is an extremely ferocious and violent carnivorous beast that will brutally attack and eat anything, be it human, animal, or plant that comes or grows within its vicinity. The most effective way to kill a Jidra is the most dangerous prospect; you have to hack at its roots. If successful, the Jidra will let out a blood-curdling scream of pain before collapsing to its death. Now, you are probably asking yourself, why on Earth would someone risk their life to kill an incredibly violent creature? Simple, like any mythical creature, the Jidra’s bones (i.e., its plant matter) are highly coveted becoming a powerful antidote when grounded and mixed into wine. My rendition of the Jidra is based on a cave amphibian called the Axolotl, who possess external gills that resemble ferns. That served as my basis when I rough sketched the Jidra with four eyes and long nails. I started planning out its body to have an exposed abdomen that interlocks with its limbs, the treelike growth on its back like the pokemon, Venusaur, and adding additional detail to the nails and body for the wooden texture. My final touch is its rooted feet to show it grip deep into the earth. It has a little give should it be a young Jidra and they are roaming for an ideal spot that is perfect for catching foolish prey.