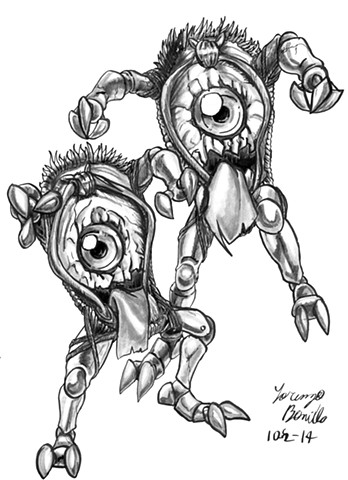 The second monster is one pair of shoes you definitely don’t want anywhere on your feet. The Bake-zori is a Japanese yokai from the Tsukumogami family of yokai beings. These are a family of living objects that when a household object reaches a hundred years of existence, the object gets a soul inhabiting its body, giving it life. These beings are generally considered harmless and would occasionally pull pranks, but when angered by wasteful users or their former owners, will band together take revenge on their previous owner for daring to throw them away. Even to this day, there are Shinto jinja ceremonies performed to console broken and unused items. The Bake-zori is the animated being of traditional Japanese straw sandals that are angered at their misuse and being forgotten by their owners. The sprout tiny arms and legs and a single eye. They usually are harmless tricksters and hang around with other animate objects. Their main reason for pranks is boredom and frustration, or jealousy and frustration over their neglect. They run around the house, causing mischief and making noises. They use a favorite chant consisting of random sounds and describing their shoe features. Original phrase: “ Kararin! Kororin! Kankororin! Managu mittsu ni ha ninmai! Translation: “ Kararin! Kororin! Kankororin! Eyes three and teeth two!” I drew the Bake-zori in pairs, because of course they would come in pairs, their living sandals. I made the arms and legs puppet-like to maintain the visual motif from prior yokai animate object drawings as the come out of the sandals sides. I added the mouth and flicking tongue as it is a staple of the tsukumongami.