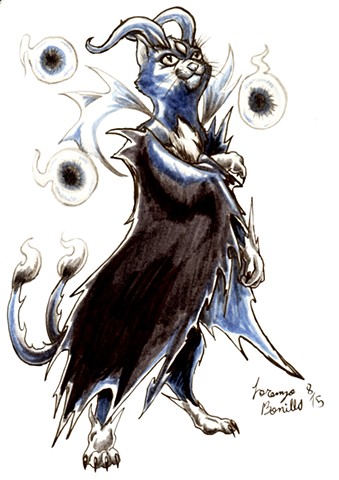 Here is the King of the Cats, The Cait Sith is a Scottish ghost cat said to haunt the Scottish highlands. It is a large black cat with a white spot on its chest. Some say it is a fairy, while others say it is a witch that can transform into a with nine times. People did not trust the Cait Sith and long believed them to steal the souls of the recently deceased before they can go to the afterlife by simply leaping over them.

The story of the Cait Sith being the king of the Cats (aside from being an early Alice in Chains song)was an old Birtiish folk tale of a man telling wife and his cat, Old Tom, that he saw the strangest thing, a funeral procession of nine black cats with white spots on their chests carrying a coffin with a crown on top. One of the cats tells the man "Tell Tom Tildrum that Tim Toldrum is dead," to which the cat exclaims, "What!? Old Tim is dead!? Then, I'm King of the Cats now!" and with that, Old Tom darts off into the chimney, never to be seen again. This story was also told in the book series, Scary Stories to Tell in the Dark.

For this version, I gave the Cait Sith an upright and regal stance. I engulfed the Caith Sith in a cloak of shadow and donning a horned crown like Loki, while keeping the nekomata tradition of giving the Cait Sith two tails lined with spectral flame as three wisps of fire hover around the Cait Sith.