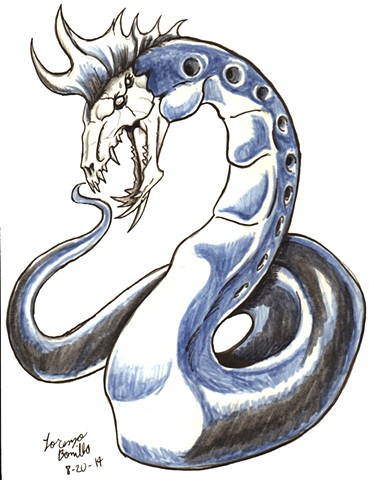 A tale of a vengeful monster, The Lambton Worm. This dragon was named after the person who slew it, John Lambton, who came across this creature when it was much younger and it grew into a large creature that terrorized the villages in Great Britain.

The story begins when John Lambton, heir to the Lambton Estate of County Durham, went fishing instead of attending Church on Sunday morning. He passed an old man who warned him of no good will come of him skipping church, but John continued on until he found a fishing spot. He wasn't having much luck fishing, until when the church bells rung to signal the end of Mass, John caught a small, eel-like creature with nine holes on each side of its head. John declares to the old man from before that he has caught the Devil and disposes of it in a nearby well, with the old man warning him of further danger should the creature remain. Since John was a rebellious young man, he repented by serving in the Crusades.

As the years go by, the creature grew and grew. Until the monster grew so large and poisonous that it began to devour local livestock and small children, moving toward Castle Lambton, where Lord Lambton, John's father, placated the creature by offering it a daily offering of milk and livestock. Many villagers and knights have attempted to kill the creature, only to fail or are never seen again. Every time anyone managed to cut the creature, it simply reattaches itself back together, and it would coil around trees and use them as clubs.

Seven years later, John Lambton returns to find his estate almost destitute. Upon finding out about the worm, John sets out to find and slay the beast, but first, he consults advice from a wise woman or with near Dunham. The witch explains John's responsibility as the cause of bringing the worm to Dunham and advises him to adourn his armor with spearheads and that he'll find the wurm at the River Wear, wrapped around a rock. She tells him that after killing the wurm, he must kill the first living thing he sees or his family will be cursed to die away from their beds for nine generations. So John prepares his armor and instructs his father that upon killing the creature, that he will sound his hunting horn three times, and that his father shall release his favorite hound, so that John may kill it to avoid the curse.

John travels until he faces the fearsome beast, who tries to constrict John in its coils, but the spiked armor prevents it from crushing him. And as John chops away pieces of the creature, the river washes away the wurm's parts, preventing it from healing itself. Until finally, John Lambton slays the beast and sounds is horn.

Unfortunately, John's dad, in his excitement, runs ahead to meet his son in celebration. John, not wanting to kill his dad, waited until the dog was released and killed the dog instead, which left the Lambton's to be cursed to not die in their beds for nine generations.

From Wikipedia, came a listing of the generations of Lambtons who have died, which helped gave the story its popularity.

(General Lambton, Henry Lambton's brother, is said to have kept a horse whip by his bedside to ward off violent assaults. He died in his bed at an old age.)

The Lambton Worm is a popular legend and a source of fictional works done by various authors, including Bram Stoker.

For my rendition of the Lambton worm, I drew a massive worm with a skull-like head that resembles a twisted version of a moray eel, as well as making sure its nine holes appeared as vents for its poison. The crest is similar to other medieval monsters like the basilisk and the cockatrice.