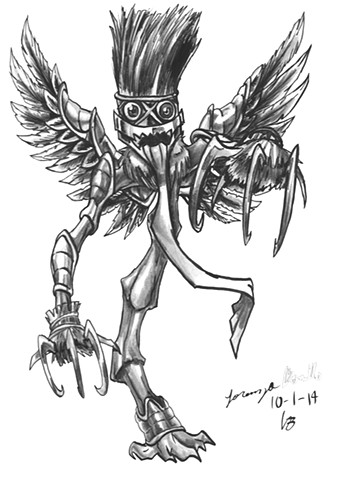 The first monster is a Japanese yokai from the Tsukumogami family of yokai beings. These are a family of living objects that when a household object reaches a hundred years of existence, the object gets a soul inhabiting its body, giving it life. These beings are generally considered harmless and would occasionally pull pranks, but when angered by wasteful users or their former owners, will band together take revenge on their previous owner for daring to throw them away. Even to this day, there are Shinto jinja ceremonies performed to console broken and unused items. Long ago, brooms were not used for household cleaning, but as actual holy instruments for purification rituals. They were used to sweep away any evil spirits or negative energy that might be lingering around a room. When achieving sentience, the Hahaki-gami still carries out its former duties as a ward of evil energy, which in this case, is to “sweep out” a baby safely from its mother and to keep guests from overstaying their welcome. My version of the Hahaki-gami stays true to the visual design presented from pictures, which I gave a tad more edge in its brush hands having blades as fingers and adding pads around the arms as its duster wings. I gave it the trademark tongue present in many living object pictures. Try thinking of the hahaki-gami as a fun form of a living scarecrow.