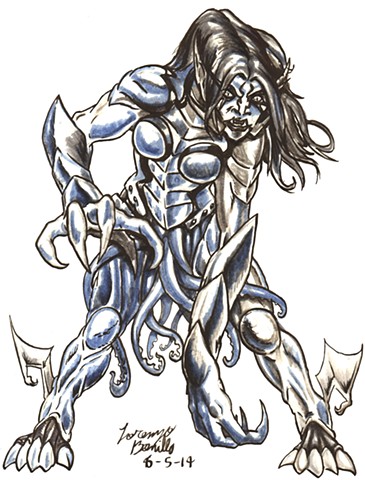 Echidna, the Mother of All Monsters in Greek Mythology, is a drakaina, are giant female dragon humans that is often described as having a human torso and the lower half of a monstrous dragon serpent. She is the mother of practically a majority of the monsters in Greek mythology that include the chimara, the Hydra, the Nemean lion, the Sphinx, and Cerberus. Her husband, Typhon, fought the Gods and while he was imprisoned, Zeus allowed Echidna and her children to roam free to serve as a test for the various heroes and demigods that spring forth and she resides in seclusion in a dark cave, forever outliving her offspring. Sounds tragic, doesn't it?

My depiction is similar to Typhon, for I wanted to establish that they are the same race of creatures. Despite looking human, I wanted to keep the drakian side prevalent, so I upped her scales while making the markings travel all around her. I used a head concept from Persona for Echidna, but followed the Nure-Onna's hair stylings and adding jaw horns to make her human, but feral. The legs are like Typhon, in that they are tendrils that fuse to form legs, with the middle being the genitals, in this case, I made Echidna's reptilian tentacles. So, again, as an ancient race, I gave them Lovecraftian features and leaving the act of mating to the imagination of fan fiction writers everywhere.