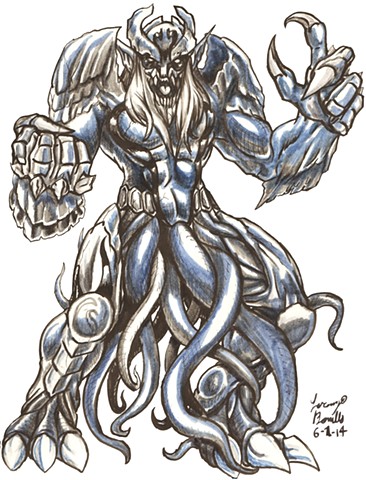 The largest and most fearsome of monsters, Typhon is a massive beast that fought against Zeus. He was a rampaging beast described as having hundreds of dragons heads, a height that can reach the heavens, and legs comprised of hundreds and hundreds of serpent coils that hissed as they moved around him. He was such a force of nature, that it caused Zeus to lose his resolve in battle and fled, until Athena called him a coward urged him to battle him. Their titanic clash ends with Zeus imprisoning Typhon beneath a mountain and held in place by hundreds of lightning bolts. Typhon is also known as being the father to many of the monsters in Greek mythology that include the Hydra, the Nemean Lion, the Chimara, and the Sphinx.

My depiction draws many visual details from his wife, Echidna. As it would be insane to do a beast with hundreds of heads, I settled on using what Echidna was described as, which was a drakaina, a female dragon human. Or, in this case, a drakon, a male dragon human. I used the Leatherback from Pacific Rim as a visual influence on textures and for the face and arms, while taking the serpent tails and using them to create the legs and pseudo-genitals for the massive monster, which gives him a Lovecraftian vibe as he is a primordial beast.