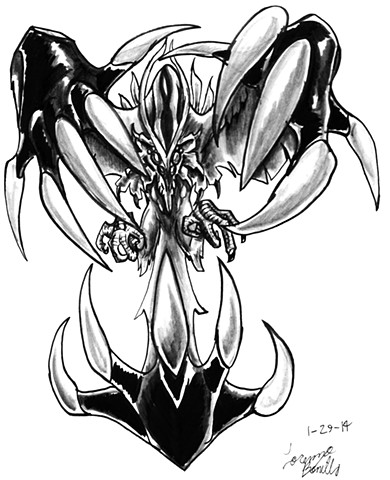 Ziz is a giant griffin-like bird from the Bible whose wingspan is so massive that it can block out the Sun, its feet can touch the land while its head can reach the very heights of the sky. It is one of the Three Great Apocalypse Beasts representing Air, while Leviathan represents the Seas and the Behemoth represents the Land. Unlike the other creatures, Ziz is capable of reproducing as it is a highly sought out delicacy and each egg can flood sixty villages while a hatching can mature into a full-grown Ziz quickly. Like the others, it is Immortal and has dominion over other animals. It is seen as the intermediary between the two extreme monsters and is often seen as benevolent.

For Ziz (who I have mistakenly labeled Nix for a long time), I used Yvethal from Pokemon as the base while adding the features from my Mignolia/Davis influences towards its head and wings and keeping the Yvethal pose as a swooping predator. Had I known it was peaceful, I would have drawn it differently. Oh well, it happens.