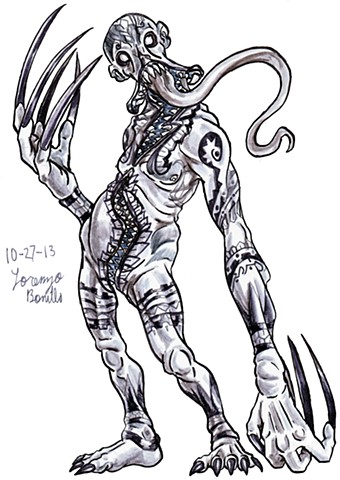 The Deception Ghoul; The Bal-Bal.

The Bal-Bal is a ghoul from the Philippines that steals and devours the dead. The Bal-Bal has long claws capable of tearing clothes and coffins apart and as a result of eating corpses; possesses foul breath and an overwhelming stench of decay. When it has stolen and devoured a corpse; the Bal- Bal will leave the trunk of a banana tree resembling the victim so as to deceive the departed's families and not to raise suspicion of its acts. Bal-Bal are often associated other corpse-eaters in the Philippines and is most feared for its appearance.

My depiction of the Bal- Bal is influenced from a picture at a Filipino museum, where they had sculptures of the various creatures on display. The Bal- Bal one had the long claws that I drew on mine, but also had a long face with an extra-long tongue protruding out of it, so it shares aspects of the Pennanagal and the Mannanagal in using their tongue for blood-sucking, while adding the Reaper break-away jaw of the Blade films for its strong bite. I added extra-jawed mouths running along the body for added creep factor and the tribal tattoos give it the unifying theme I gave all my Monsters from the Philippines.