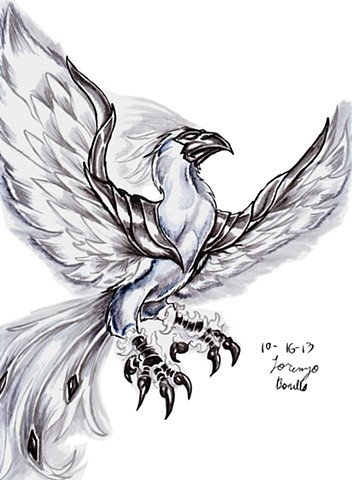 Arising from the ashes; The Phoenix.

The Phoenix is a mythical bird that symbolizes the concept of rebirth and resurrection. A bird with a fiery plumage that burns every so bright, until it burns itself out into ash, only to be born anew as a new bird. Sorta like the Doctor's regenerations. The Phoenix is depicted either as a completely inflamed bird, or a bird with brightly red or glowing feathers.

The Phoenix is of Greek origin, but is heavily influenced by the Egyptian Bennu, a solar bird that also recreates itself, by literally creating itself before Creation. The Phoenix was such a strong symbol that it was adopted as an early symbol for Christianity.

For mine rendition of the Phoenix, I did a combination of both. Where I made the wings, tail, and crest feathers glow incandescent, while giving it a bird body. I made sections of the Phoenix metallic as a callback to my prior creation, the Thunderbird, as it had a metallic frame to support the electrical currents and storm clouds emanating from its body.