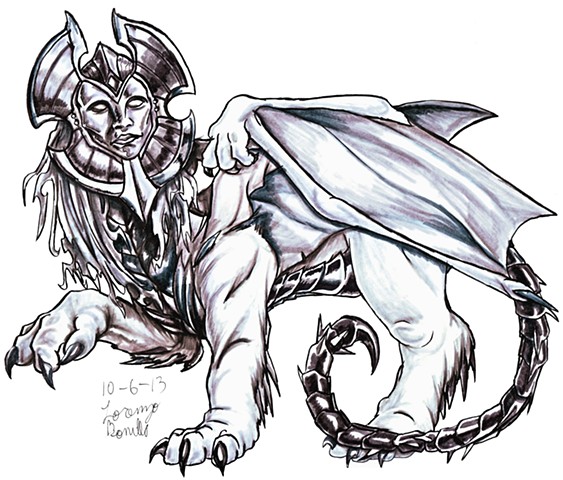 Number 2: The Sphinx
< previous next >

Here we have the winged riddler, the Sphinx.

From Egypt, the Sphinx served essentially as a heraldic monument for Egyptian pharoahs, as many pharoahs had their heads made atop of these lion bodies, to show divine ties to the solar diety, Sekmet, who is represented as a lioness. The most famous Sphinx is, of course, the Great Sphinx of Giza, whose face is possibly of the great pharoah, Khafra. Aside from lions with human heads, the Egyptian Sphinxes have ram-headed and hawk-headed versions.

One other note to mention, the term Sphinx, is a name given by the Greeks, as the Egyptian name for these creatures was lost to history. Another note is that the Sphinxes' name means "to squeeze, to tighten up", possibly to infer of the lioness's method of killing prey via closing their jaws on the windpipe of creatures.

The Greeks adopted these creatures during Alexander's occupation of Egypt. They named the ram-headed versions as Criosphinxes and the hawk-headed versions as Hieracosphinxes. The main depiction is a single demonic entity, that brought destruction and misfortune to all, was the daughter of Echidna and Typhon. This is the one known in Oedipus that guarded the City of Thebes and for challenging adventurers with a riddle and devouring those who fail to answer it. The early tales never really tell the riddle until later in Greek history.

The riddle is; "Which creature has one voice and yet becomes four-footed and two-footed and three-footed?"

"What is that which in the morning goeth upon four feet; upon two feet in the afternoon; and in the Evening upon three?"

Failure to answer was death by strangulation and devoured by the Sphinx. Oedipus correctly answered the riddle as "Man, for Man is who crawls on all fours as a baby, then walks on two feet as an adult, and then uses a walking stick in old age,"

In some versions, the Sphinx further challenged Oedipus with a second riddle;

For which the answer is "day and night."

Upon hearing the correct answer; The Sphinx then killed or devoured herself upon Oedipus' answer.

Around the world, there are actually versions of the Sphinx in Assyria, Southeast Asia, and served as forms of art in Europe.

For my design of the Sphinx, I did a continuation of my version of the Manticore, which was an feline species that aspire to look like humans and wear decorative masks to hide their hideous appearance and devour those who see their true visages. So, I drew a cat with scorpion armor pieces around its body, but instead of having the true face shown, I had the Sphinx keep the mask on, and made a highly detailed mask. As for version, I stuck with the Greek version, as that is the version a lot of people are familiar with, aside from the Egyptian version.