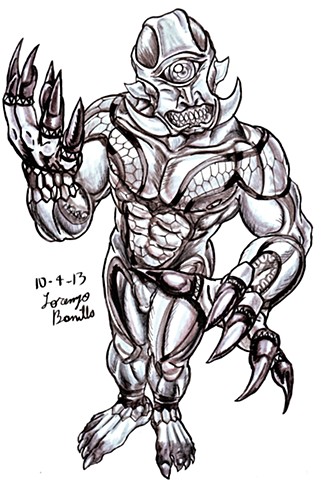 Number 3: The Bungisngis
< previous next >

A cyclops that exists outside of Greece, the Bungisngis.

This cyclops resides in the Phillippines, with its giant stature and single eye. The Bungisngis possesses excellent hearing to compensate its lack of depth perception. Its unique in having a pair of tusks protruding out of the side of its head and for its incessant giggling, as the name, Bungingis, itself comes from the Tagalog word "ngisi" which means "to giggle". The giant is said to reside in the Meluz, Orion, Bataan, territories and is a villain in the Filipino story "The Three Friends - The Monkey, The Dog and The Carabao". In the story, the Bungisngis tosses the Carabao with such force that it ends up knee deep into the ground, but the creature, displaying that it is slow witted, is easily tricked by the Monkey, leading to its death.

For my render of the Bungisngis, I drew inspiration from the anime, Attack on Titan, especially for the head. I used the muscle details to serve as tribal markings for it. The biggest challenge was the tusks, as art of the creature gave it elephant tusks, which I found lacking, until I saw warthog tusks and found those to be perfect for the design of the Bungisngis. Add in some tribal tattoos and I got a complete creature.