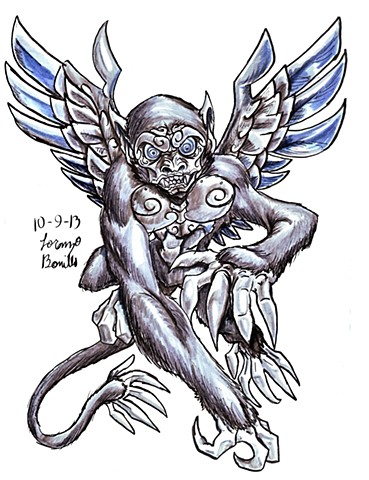 Number 5: The Hsigo
< previous next >

Yes, it is an actual flying monkey, The Hsigo.

Like the Lusca (Sharktopus), the Tenome (Pan's Labyrinth's Pale Man), and the Mogwai (Gremlins); The Hsigo is most well known as the Flying Monkeys from The Wizard of Oz. And just like those pop-culture creatures, they have roots in actual myth and folklore. The Hsigo is a flying monkey of Chinese mythology and folklore that are winged monkeys with human faces that are harbringers of destruction and mayhem, while also serving as familiars and servants to people who can control them.

My design for the Hsigo is the simple flying monkey concept, except adding Asianic statue features to the face and body, while placing an emphasis on hands on various parts of the creature as seen in the wings and tail, to show that its prehensile practically everywhere.