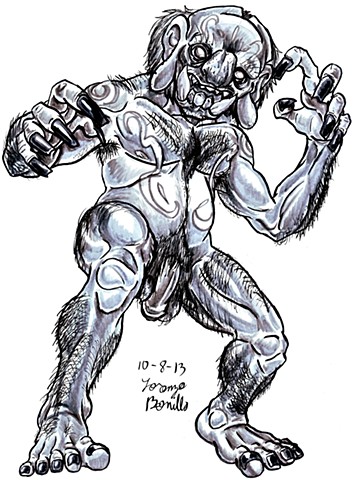 Number 9: The Troll
< previous next >

A popular bridge dweller; The Troll.

From Norse mythology, The Troll is often used synonymous with Jotunn, the Frost Giants of Norse mythos. From this, Trolls were hideous giant mountain dwellers who were hostile to humans. It was Scandinavian folklore that Trolls became more clearly defined and given the attributes we are familiar with; large and slow-witted, capable of turning into stone in daylight and man-eaters. However, their appearance is described as looking very human who live in remote mountain areas with a form of community. However, a few interesting traits was added to Trolls, being non- Christian beings and afraid of lightning. This trait has been used to explain strange rock formations and as element in certain heroes driving away trolls from the lands and explaining Thor's capability of warding them off.

Later interpretations have kept the ugly appearance, devourer and stone vulnerability. As well as placing them around the Fey species of chaotic creatures known as Changelings (shapeshifters who steal babies by switching it with their own) and dividing them up into two types; large trolls and small trolls.

My version was doing a deformed koala face with a large framed body. I added a few glow marks for mystical and I just went nuts with my brush pen to give it its excessive body hair appearance, because I wanted it to look disgusting to look at.