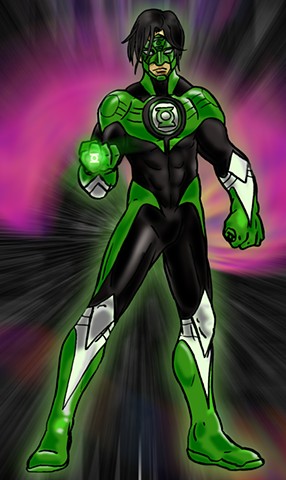 As a fan of the Green Lantern series, I wanted to participate in this contest so I went about brainstorming ideas for a newly designed Green Lantern. For this rendition, I went with Kyle Rayner for my submission and went to figure out how to redesign his uniform. I started by playing up his artistic and manga influenced roots while adhereing to the design elements that made the GL costume such a classic. So, I based his costume design on Ultraman, who uses a mixture of curved and angular elements to their costumes for Kyle's design. I used white for the knee and elbow elements to add a separation of the green and black, as I do feel the white helps compliment the colors when done right. For the mask, I simplified his classic "Crab Mask" look for a more streamlined design as I seen from various artists always deliver mixed results in drawing that mask. So, I went and made it easier to draw the mask, while connecting it to the suit, again, to adhere to my Ultraman suit design.