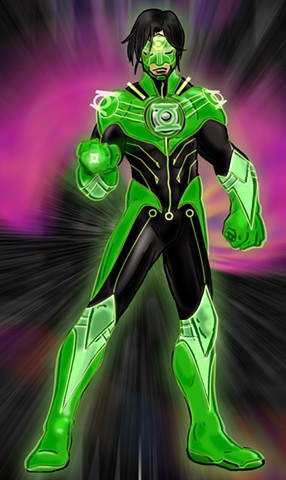 Project Rooftop, for those unaware of its existence, is a website where various artists submit works that consist of costume redesigns for various superheroes from all comic book universes. Submission is pretty open, as long as you link to your creative website/digital portfolio and that the work is of an original design. Occasionally, the run design contests that are judged by panel and NOT by popular vote. The reason I emphasis that point is from my own disastrous experience participating in a digital portfolio site,Talenthouse, and their Create A Superhero contest, that resulted in basically established artists blowing everyone else out of the water and people with shareware creating superheroes from templates that get more votes than struggling artists. See any similarities to the current Kickstarter debate?

The Light Armor Mode is inspired from the design of the newest Green Lantern, Simon Baz's own uniform, as it utilizes a hard light effect to make the green parts of the suit glow, with a light trace effect over aspects of the suit, and I thought that was a good touch. Why not make it overlay the base design to give the uniform a form of additional protection? So I built the core elements of the uniform in Illustrator, along with the light trace designs and Lantern Corps symbols.

I then transferred the patterns to the main file, separated each element for layout, and played with Layer effects to develop a hard light construct effect over the uniform.