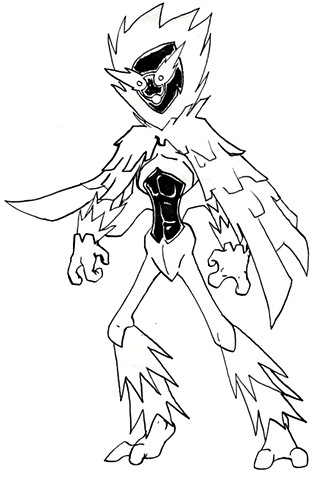 For this version, I basically kept the elements I used from past versions while adding a few features to give this creature, which I have dubbed the "Cucalon", a more Pocket Monster feel, which I shall describe using the list form;

This drawing was done in pencil, then inked using a brush pen. I cleaned up my linework in Photoshop to prepare it for digital coloring. The end result is in the next panel.

The finished piece, up next, is the one I submitted to Kevin Glusing, the game's creator. I also, for the liberty of making this creature fit within the campaign setting, I made this a Construct creature that serves as bodyguards to mystics as they possess phasing and teleportation abilities with the dangerous talent of copying and using other mystics spells.