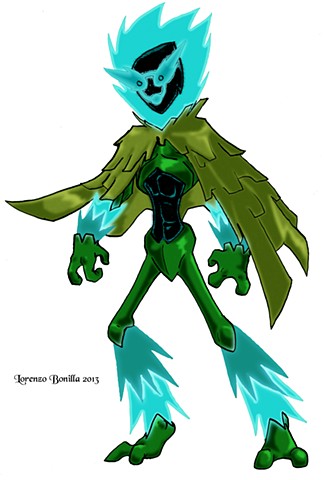 This version is the complete Colored version of my earlier drawing. I did the coloring in Photoshop using mostly the Select Lasso Tool for body shapes and shade details. I filled the base colors with Paint Bucket, used the Smudge Tool to refine shading, and the Gaussian Blur Filter to soften the shades and tones. I use Inner and Outer Glow F/X in the Layers Channels for the flames, while adding the Stroke Command to my selections to maintain the flame shapes. I added another layer over my Color layers with textures that are subtly placed on the body. I then erased the inked parts around the flames for visual flair.

The finished piece is the one I submitted to Kevin Glusing, the game's creator. I also, for the liberty of making this creature fit within the campaign setting, I made this a Construct creature that serves as bodyguards to mystics as they possess phasing and teleportation abilities with the dangerous talent of copying and using other mystics spells. But, interestingly enough, that wasn't all I sent to him.