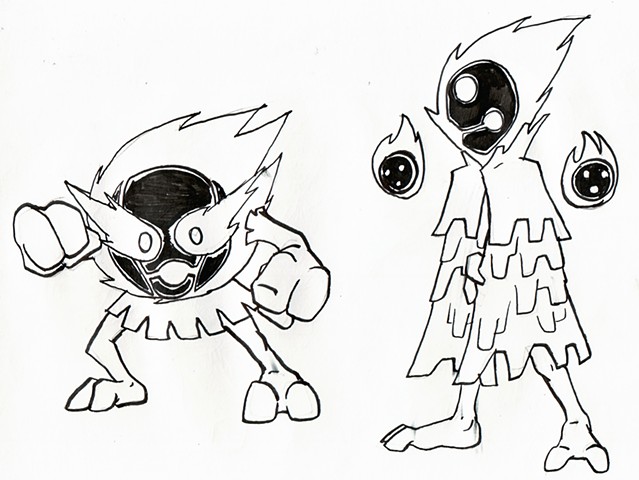 Now, When I went to design the Cucalon, I originally went about giving it various stages of evolution, ala Pokemon. These two drawings were the Cucalon's two stages of evolution. Right now, they are still in the original scanned format, but I plan on cleaning these images up and perhaps, add color to them as well to complete the Cucalon trifecta.

Before I explain these two creatures, let me go further with my last post. Now, the finished Cucalon piece is the one I submitted to Kevin Glusing, the game's creator. I also, for the liberty of making this creature fit within the campaign setting, I made this a Construct creature that serves as bodyguards to mystics as they possess phasing and teleportation abilities with the dangerous talent of copying and using other mystics spells. When I submitted the finished one, I threw in these two to show him that I had an evolution stage for them, but figured since we are allowed to create A Monster, I thought I would be limited to just one, so I went with the Final Form. To my complete and utter surprise, Kevin accepted ALL THREE renditions and asked for the names of the other two creatures. Vexed, I went to my sister for suggestions and went with the first (and best) ones she gave and submitted them to Kevin Glusing. All three monsters are now officially in the Mystical Kingdom of Monsters Campaign manual as First Edition Monsters.

Back to my creatures. The First creature, ElCu, is the Stage One of the Cucalon and I basically went with the idea of having the coconut head be the starting stage of the Cucalon developing a body.So I gave it short arms and legs and a plantlike skirt as a holder for its body to keep its flaming head afloat. This is also where I start to exagerrate the flame eyes on this creature.

The second stage creature, Cucuy, is when ElCu starts to evolve a much larger appearance by increasing the length of its legs and turning the plant skirt into a long cape to protect the body as it develops. I flipped the head rotation to give this version a cyclopean eye and a more distinguished mouth design. I kept the Cucuy's arms hidden while having little Cu's floating around its shoulders to be used in battle and serve as a form of recon and extra offensive and defensive projectiles for the Cucuy. The final stage, The Cucalon, is when I give the creature a complete body with a shortened cape and flipped the coconut back to its original state as shown in my previous picture.