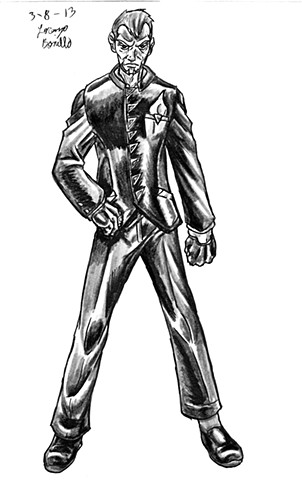 A character for another project; Director Bane.

The basic gist is that he runs a company that is responsible for running illegal genetic testings on minors to awaken dormant preternatural traits within their DNA. Also, he killed the business partner who was the father of the main hero, Raven.

On his suit, I wanted to play with him having a short collar business suit, with triangle buttons as I wanted to play with that style on the wardrobe. The gloves are also a stylistic touch as he has a ring on each finger that emits a small kinetic sphere, capable of collecting and storing kinetic energy by simple arm swaying and amplifying his punches by unleashing the stored energy, should he feel the need for physical conflict.

However, he serves as more of the power broker style of villain, who favors operating in the shadows to preserve his public image. Any physical conflicts he uses his private security staff, android troopers, or his ace bodyguard/assassin; Gideon.