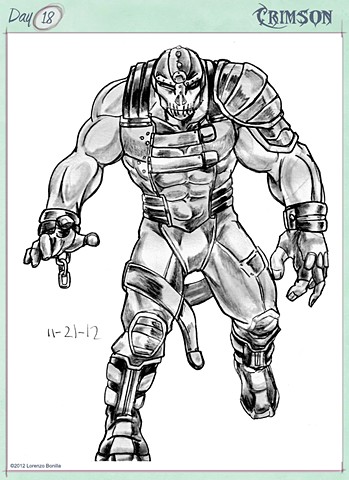 Story: His name is spoken in sheer dread. A mysterious force that is known simply for his great strength and terrifying anger. Reports of his origin are mixed, ranging from a prison experiment gone wrong to a demon made flesh, the rampaging beast known as Crimson is a difficult to defeat as he is to contain. He is known for rampages starting in the Canadian wilderness and follows and all along the Midwest. Where he goes, no one knows, but any who try to stop him end up a pulpy mess. The most infamous incident is the Second City Tragedy, where the Second City Armada attempted to Apprehend Crimson, only have Crimson kill the heroes Tempest, Kamen Brawler, and their leader, The Samaritan, while severely injuring both Ryuji and Battalion. It was then that the Frontline, returning from an extra dimensional battle against the Archangel Corporation, did they fight the monster Crimson. With the strength of their newest member, Tyger, Crimson was stuck in a physical deadlock, with E.S.C.O. delivering range support,while the combined powers of the Alchemist, Duo, and Stasis created a containment cell, with enchanted bindings to hold the silent killer. The final assault came when Azrael, carrying Boost, dashed at Crimson, taking a vicious blow to the head, nearly knocking it off if not for his healing factor, hurled Boost to overload Crimson’s own powers. This weakened Crimson enough to contain the savage juggernaut and contain him in a special prison developed by the Loman Organization. Abilities: Crimson possesses mystically enhanced strength and invulnerability. Crimson’s strength is such that he is capable of leveling buildings with a punch and shattering vehicles with a stomp. Should anyone engage Crimson to a physical confrontation, he is capable of tapping into infinite reserves of power to increase his strength to overcome his opponent. A painful demonstration of Crimson’s strength was his punching of the Kamen Brawler’s torso, resulting in perforating his organs and sending his rib cage and spine out of his body. With Tempest, Crimson swatted away an attacking Tempest, shattering nearly every bone in his body. Crimson’s mystical enhancements prevent Crimson from experiencing fatigue and the need for food, water, or air. However, Crimson has shown a vulnerability to psionics and mystical attacks. Crimson can be fought to a physical standstill, as the Tyger was able to fight Crimson toe to toe without yielding. Conception: Crimson was one of my high school creations as I was looking for a Juggernaut/Bane fusion and developed this character over time as I originally had him with enchanted boots, gloves, belt, and a mask, but abandoned those aspects due to the convoluted look of him and streamlined it down to a few armor components with aspects of a special prison/asylum uniform.