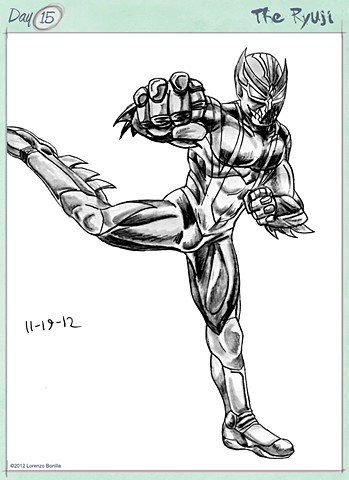 Story: Kenji Abarai emmigrated to the States to work at his father’s architectural firm, but that wasn’t the only reason Kenji came to the States. As a twelfth generation Dragon Mage, Kenji possesses the spiritual powers of his ancestors to tap into the mystical energies of the Dragon Spirits. For generations, his family operated in secret, until the emergence and escalation of superpowers and Paranormals happening, Kenji felt now is the time to no longer hide their powers, but to showcase them at where the Powers Boom occurred, The United States. Donning the costume identity of Ryuji, Kenji sought out to find the members of the superhero team, The Frontline, only to find that they disappeared to do battle with the Archangel Corporation. With no team, Kenji struck out on his and fought crime whenever he came across it. This drew the attention of the Samaritan, who offered Kenji the opportunity to join a new team he was starting up, The Second City Armada. In the Armada, Kenji got the thrill of action he was looking for and a team to fight alongside with. He became a hit with children because of his masked persona and visited every school that asked him to visit. However, The Samaritan felt the team needed a huge challenge to make themselves truly Heroes of Chicago a felt that taking down the Rogue terror named Crimson. Kenji was uncertain, feeling that they are not ready for such a threat, The Samaritan convinced Kenji to go, citing that it is the uncertainty that true heroes strive to overcome. So, Ryuji and the team get together to fight and defeat the terror named Crimson. During the battle with Crimson, Ryuji provided range support, figuring that fighting a powerful individual face to face would be suicide, feeling assaulting him with his hydromancy would be more helpful than combat. But once Battalion was incapacitated and the Samaritan was knocked back again, The Ryuji was forced to fight. He started with nerve strikes to immobilize Crimson, only to have him tear out Ryuji’s left arm, and Ryuji collapsed in pain and shock. Kenji was barely conscience when he witnessed the Samaritan, Michael, stand up against Crimson, only to see his friend, his comrade, die at the hands of a heartless monster. In the aftermath, three men have perished. Battalion has just arrived to see the aftermath as Ryuji gets taken to the hospital. It is then that the Frontline has come to stop Crimson’s rampage. After attending both his teammate’s memorial services and the commemoration of the Armada’s Memorial Statue, Kenji decides to return to Japan. In Japan, Kenji is fitted with an advanced prosthetic and approached by Japan’s hero, Masamune, who wants Kenji’s alter ego, the Ryuji to rise again. At first hesitant, Kenji eventually joins Masamune’s team, Bishamon. Abilities: Ryuji possesses the powers of river dragon spirits that enable him to manipulate water from simple blasts of water to elaborate constructs resembling dragons or weapons. He requires a source in order to tap into it, but in desperate times, can use his own blood as a source for constructs. Ryuji is also capable of changing water into various states from water to vapor to ice. Ryuji is also a skilled fighter, capable of close quarters combat and skilled in melee weapons based on the water based constructs formed by Ryuji’s power. Conception: He was a long list of blank slate characters I compiled with the intention that I was planning for my Japanese Super team concept. His attire initially got overcomplicated thanks to movie costumes, until I found a much more simplified design idea I did a while back that I like and added elements from the Japanese wrestler, Ultimo Dragon, mainly his kicking pose and the scallops along the boots and gloves.