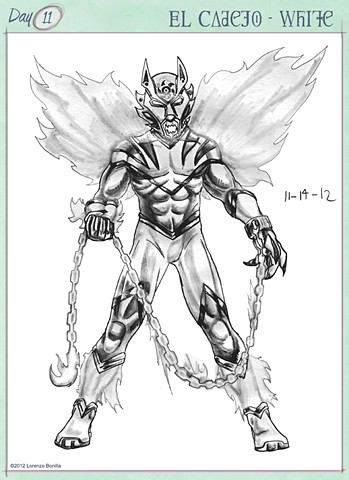 Story: Tomas Martinez, while his brother, Ramon is a hot head, Tomas is the diplomat who often tries to mediate or diffuse situations his brother gets into. One day, Tomas gets involved in a situation he can’t get his brother out of, and he and Ramon are executed by the syndicate Ramon fought with. But their bodies were buried in a sacred site to the Trickster God, Coyote, and the God makes a pact with both brothers for a chance at justice and a new lease on life. Imbued with the Spiritual Flames, Tomas is brought back as El Cadejo: White. Since Tomas was the mediator of his brother, Ramon’s fights, Tomas White Dog persona was given the title of the Pacifier, and his abilities are geared toward healing and subduing threats. As he represents the white dog that tries to subdue the black dog from going out of control, Tomas is responsible from preventing his brother, Ramon, from going into a beserk state by utilizing his pacifying flames and chains to subdue his rage. Following their resurrection, Ramon immediately sought out to take revenge on the syndicate, while Tomas opted to use his powers to protect their town. As the brothers separated, Tomas began by ousting the cartels that ran amok in their town. While doing so, his Manacle of Bonds flashed and he felt his brother’s rage nearly overwhelm him. Concerned for his brother, Tomas rushes to the location he felt and saw the aftermath of the carnage his brother has wrought. Once Tomas calmed his brother down and witnessing the emotional turmoil he experienced from killing everyone in the manor, Tomas understood what the Coyote meant about the price of their bonds means they can never truly be apart and set about the slow process of building his brother back into being the hero he knew he could be when they were kids. Soon, The Hermanos Cadejos became a household name of their town. He and his brother soon were local heroes in their town, until the Latin Intelligence Alliance approached the brothers to work in establishing a new super team, Los Superiors. The Brothers leapt at the opportunity Tomas saw it as an opportunity to continue doing good works and as Ramon saw it as further proof of redemption. The El Cadejo Brothers have remained members of Los Superiors since their enrollment.

Abilities: El Cadejo: White transforms into a supernaturally enhanced Spirit of Vengeance. With it, he possesses enhanced strength and speed while capable of manifesting Pacifying Fire, a spectral flame that saps the strengths of enemies by incapacitating their resolve for battle. His flames can also shift into the Purifying Flames, a spiritual fire that can heal almost any injury. El Cadejo is able to create Spectral Chains, chains of spirit energy that can extend to infinite lengths, split off into multiple chains, can channel his flames through, and are inherently unbreakable. Both Cadejos are effectively invulnerable, but this state is conditional for as long as they are close, they are invincible, but the farther one is from the other, the more vulnerable to injury they can be. El Cadejo also possesses a Manacle of Bonds that enables both he and his brother to call the other forth should they separate or are a part of each other. They also serve as both a telepathic and empathetic link to both brother’s thoughts and feelings. This serves as an emotional tether so that one will always find the other. Both Cadejos are able to manifest a Vengeance State, where they done a fiery cape of their respective flames, but with the ability to unite their fires to create punishing tandem attacks such as flame tornadoes and webs of spectral chains. Conception: I designed El Cadejo: White first as I had an idea for his look the fastest as I based it on the White Lantern designs, as it a color scheme/ pattern combo that works. The hardest elements for this character are the same issue I had with Fenris; being the incorporation of fur and the mask. Earlier concepts gave me numerous issues in incorporating fur along the boots, his free hand, and I originally had a lengthy fur capelet to simulate a tail, but thanks to the New 52 Firestorm designs, I turned the actual fur into spectral flame components to simulate fur. As for the mask, I combined elements of fan art for the patterns while using the overall head shape from the live action series, Garo. As for the brother bond, I based it on the relationship between the brothers Rin and Yukio from Blue Exorcist as one is calm while the other is wild and reckless and the difficulties each has with each other, while showing both will genuinely protect and help the other.