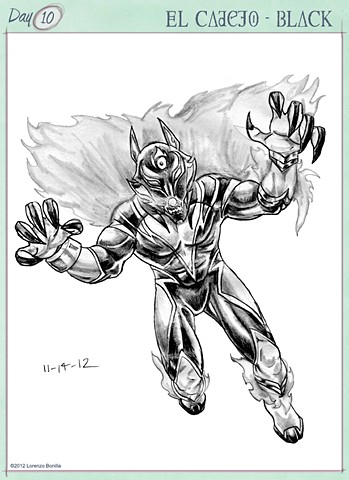 Story: Ramon Martinez, while Tomas is the level headed one, Ramon is a hothead who often gets into fights that are triggered for various reasons that require his brother, Tomas, to bail him out of such situations. Until one day, Ramon got into a fight with a some thugs at bar for insulting his mother, that he hospitalized three of the four men. Unbeknownst to Ramon, those men belonged to a vicious syndicate that executed both him and his brother. However, their deaths were on a sacred site where the Trickster spirit, Coyote, offers them a chance at revenge in exchange for serving him. Imbued with the Spiritual Flames, Ramon is brought back to life as the Demon Dog of Folklore, El Cadejo: Black. Since Ramon was a physically aggressive and intimidating person in life, His Black Dog persona is deemed the Warrior and given abilities meant to cause harm, however like the demon dog of myth, his rage slowly can overtake him and he will become a rampaging brute unless his Brother, Tomas, is there to stop him. Upon their resurrection, Ramon’s first goal was revenge on the syndicate that killed him and his brother, however Tomas tried without luck to talk him out of going after the syndicate and Ramon went off on a rampage at the syndicates main base. By the time Tomas came, he comes across a blood soaked and frenzied Ramon, who effectively slaughtered every single man,woman, and child in the syndicates manor. Devastated by his actions, Ramon now defers to his brother in regards to course of action so as to prevent himself from losing control again. He and his brother soon were local heroes in their town, until the Latin Intelligence Alliance approached the brothers to work in establishing a new super team, Los Superiors. The Brothers leapt at the opportunity as Ramon saw it as further proof of redemption and Tomas saw it as an opportunity to continue doing good works. The El Cadejo Brothers have remained members of Los Superiors since their enrollment. Abilities: El Cadejo: Black transforms into a supernaturally enhanced Spirit of Vengeance. With it, he possesses enhanced strength and speed while capable of manifesting Punishing Fire, a spectral flame that burns all enemies who possess fear in their hearts. El Cadejo is able to create Spectral Chains, chains of spirit energy that can extend to infinite lengths, split off into multiple chains, can channel his flames through, and are inherently unbreakable. Both Cadejos are effectively invulnerable, but this state is conditional for as long as they are close, they are invincible, but the farther one is from the other, the more vulnerable to injury they can be. El Cadejo also possesses a Manacle of Bonds that enables both he and his brother to call the other forth should they separate or are a part of each other. They also serve as both a telepathic and empathetic link to both brother’s thoughts and feelings. This serves as an emotional tether so that one will always find the other. Both Cadejos are able to manifest a Vengeance State, where they done a fiery cape of their respective flames, but with the ability to unite their fires to create punishing tandem attacks such as flame tornadoes and webs of spectral chains. Conception: I designed El Cadejo: Black second and consistently revised his design over and over again as his was the most difficult in body, but easiest in facial markings. The hardest elements for this character are the same issue I had with Fenris; being the incorporation of fur and the mask. Earlier concepts gave me numerous issues in incorporating fur along the boots, his free hand, and I originally had a lengthy fur capelet to simulate a tail, but thanks to the New 52 Firestorm designs, I turned the actual fur into spectral flame components to simulate fur. As for the mask, I combined elements of fan art for the patterns while using the overall head shape from the live action series, Garo. For his body, I wanted his look to feel primal, but each pattern I drew up did not meet my satisfaction. One day, I came across a happy accident while doing some sketching that I found a pattern and design style that worked for Black’s look and commited to the design since. As for the brother bond, I based it on the relationship between the brothers Rin and Yukio from Blue Exorcist as one is calm while the other is wild and reckless and the difficulties each has with each other, while showing both will genuinely protect and help the other.