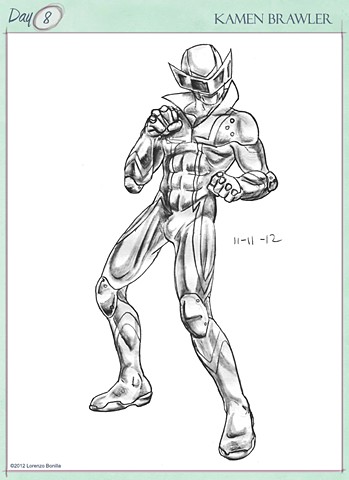 Story: Justin Chen lived with his family in Pilsen, close to Chinatown. While active in his school in both his studies and member of both Student Government and The Wrestling Club, Justin desired to be more than just a “regular Joe.” With the rise of Paranormals and costumed vigilantes, Justin desired to be a super hero. Upon starting college at UIC, Justin crafted a home-made costume, based on Sentai characters, and began to call himself the Kamen Brawler. First thing Justin did, was get accustomed to the costume and mask, then familiarized himself with the neighborhoods and taking notes on navigation during his off days and free periods from classes. The next step, find a superhero to learn the ropes, seeking out Pilsen’s hero, the Bonesplitter. As Bonesplitter is around the same age as Justin, the two often worked together, which the media dubbed them “The Masked Brawlers.” When Frontline disappeared to wage war with the Archangel Corporation, The Kamen Brawler operated solo for a while, until he was approached by the Samaritan to join the Second City Armada to fill the power vacuum of heroes in Chicago. With an upgraded suit, Justin became just as popular in Pilsen as his comrade. But that all changed when the Samaritan decided the Armada was to face the mystic brute, Crimson. At the city limits, the Armada awaited for Crimson’s arrival. Kamen Brawler was the first to rush at Crimson, which would be his final act, as Crimson completely destroys Justin’s Torso, killing him instantly. He was the first to fall and as the battle raged, so too did the Second City Armada. Justin’s heroic identity is memorialized, alongside the Samaritan and Tempest in Millennium Park. Bonesplitter visits the memorial every morning in remembrance of his fallen friend. Abilities: The Kamen Brawler is a proficient hand to hand combatant capable of close quarters combat and specializes in one-on-one and multiple opponents at once. His suit is a modified Kevlar suit that is resistant to small arms and melee weapons. His gloves, joint pads, boots and helmet are heavily reinforced to ensure maximum damage to put down opponents. Conception: A listing of character templates I had in back stock that I decided to flesh out and develop for this challenge. I modified his look after the character Casshern and developed his look while adding details for a modern design. The name is just a throwaway that I decided to commit to for the look. However, when I decided to pair him with Bonesplitter, the story took a life of its own and as I set him to die in the Samaritan’s back-story, that made his death much more significant.