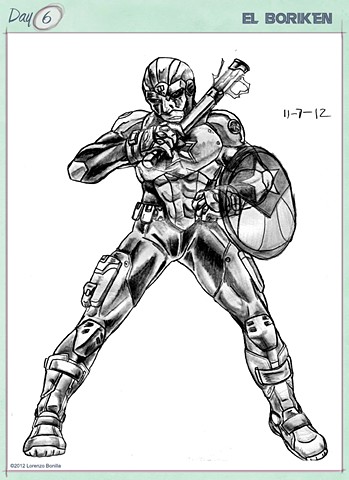 Story: Luis Mendez was a U.S. Marine Corp Captain serving a tour of duty in Afghanistan, before that, he worked ops in Iraq and Pakistan, before being approached for a Special Ops in Project: El Boriken by his superiors. At first glance, Luis thought it was merely a publicity job, until he meets the first two supernatural members of the team, Los Superiors, El Cuco and La Sayona. He is the sixth individual to wear the Boriken Suit as prior wielders had great difficulty handling the Tactical A.I. affixed to his helmet and as a result, were killed in action subduing various paranormal threats. Luis's ability to handle intense stress during his time in the Iraq town of Fallujah made him a prime candidate for the Tactical A.I. So far, Luis has been able to handle the interface, thanks to mental exercises taught to him by El Cuco and his own military training. Luis understands the need for a Latin American Team to serve as a response to the growing amount of superpowers in the States and Japan. As well as Luis having to deal with the existence of the supernatural as he and his team are deployed to combat paranormal threats under the guise of terrorism and underworld combat. Add to the stress of representing Puerto Rican cultural pride, combating of paranormal threats, and the advances of La Sayona, make Luis's life a difficult one. He has formed a good friendship with both Cadejos, a friendly rivalry with the Skull King, and has good friendship with El Cuco. Abilities: The Boriken Suit provides the user with enhanced strength, speed, and reflexes. Suit is made of a Kevlar-nomex weave for resistance to bullets and melee weapons. Armor plates are ceramic armor dipped in memory polymers for extra durability. The Boriken suit uses carbon nano tubules to regulate and power the suit while all operations and main tactical data are housed within the helmet. Helmet contains Tactical A.I. interface that calculates and assess tactical data to suggest host of best course of action during combat scenarios. Suit also allows the user to access and interface with various computer and electronic devices via USB cables located in the gloves.

The Boriken Suit is able to generate short term hard light constructs, such as shields and melee weapons in the event of an emergency. As a fan of comics, Luis’s favorite construct is an energy shield formed like flag of the Puerto Rico, as a nod to the character, Captain America. Utility belt contains survival equipment, stun batons, shatter discs, emergency backup armor and portable handguns. As this is sixth inception of the Boriken Suit, Luis has access to use the prior Suits for select mission parameters. Conception: This is the character I go through so many revisions over, as I had a primary design in mind, but Alex Ross beat me to it with his render of Buck Barnes as Captain America (which strongly resembles the Puerto Rican Flag), so I tried and I tried to make a character that won't resemble Captain America pastiche, ultimately just saying "screw it" and drawing him as is. His suit is now another revamp of a previous rendition, as I initially made it a combo of armored top/pants combo, until watching Young Justice made me design the suit more form fitting and added the components to give it a more super hero look. I wanted to showcase both his weapon and construct, as the shield is a big deal and him using stun batons were his main weapons.