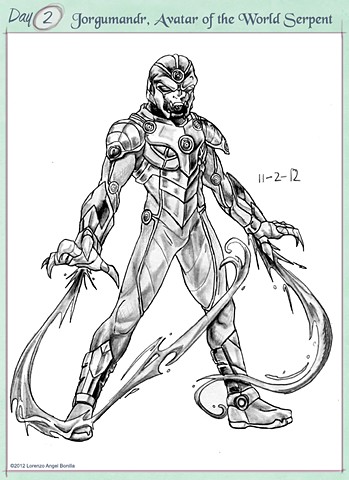 Day 2: Jorgumandr, Avatar of the World Serpent
< previous next >

Story: The Avatar of the World Serpent belongs to an apocalyptic cult called Ragnarok, who believe that to save the world, you must destroy the old world in order to bring about a new world. Jorgumandr belongs to the Sect that believes of destruction by nature through poison or hurricanes. This sect of Ragnarok is responsible for numerous gas attacks around the world, but few have ever survived an encounter with their Champion, The Jorgumandr Avatar. This Avatar has either attempted or succeeded in poisoning water supplies, destruction of dams or levees, and releasing airborne pathogens in the name of Ragnarok. The Alchemist and other Dee Agents have done battle with the "World Serpent" Avatar and other champions from the Ragnarok cult, as their champions each possess a Philosopher Stone fragment that the Agents seek to reclaim for the Order.

Abilities: Using the Philosopher Stone: The Avatar is capable of Blood Alchemy, using one's own blood to transmute or manipulate the properties within the blood. This can range into blood whips, projectiles, acids, shrapnel shards, and bloody blades. The stone helps accelerate blood regeneration to counter the effects of anemia and increase the stamina of its wielder. The Avatar demonstrates a knowledge of mechanics, particularly in bombs, poisons, and in electrical structures, to better suit their ends and beliefs. The Serpent Avatar is capable of close quarters combat, but is truly proficient at mid-to-long ranged combat , probably to better ensure his/her escape.

Inception: I actually based this character from an old monster drawing I did in high school and it started off as a fairly generic aquatic monster, until I refined it more in College, particularly the head. I developed the idea of blood transfusions and transmutations thanks to Fullmetal Alchemist, after hearing the numerous components found in blood and to explain away the character's inability to experience fatigue from blood loss. I may also modify its abilities further after witnessing the horrifying ability known as Blood Bending from Avatar: The Last Airbender and Legend of Korra, as such a trait may work with one who can manipulate his/her own blood.