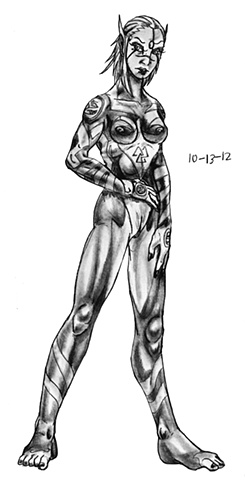 After Beowulf fought and dismembered Grendel, Grendel retreated to his underwater cave to die from his wounds, but he wasn't alone. Grendel died in the arms of his mother, who was none too pleased seeing her baby boy die. In retaliation, Grendel's mother visits the mead hall, Heorot, and slaughters every single person within it. This brings back Beowulf, who is tasked to defeat Grendel's mother. Armed with a sword, Beowulf sets out to confront Grendel's mother at her lake home, Grendel's Mere. Upon reaching her home, Grendel;s mother grabs Beowulf and drags him underwater.

Upon reaching her cave, Grendel's mother and Beowulf engage in mortal combat, Beowulf's sword proves to be useless against her skin until he finds a magic sword, Hrunting, and decapitates her with the sword. He later beheads a revived Grendel and presents his head to Hrothgar at the "ninth hour".

Grendel and his mother are, as scholars believed, an aspect of the Cain Tradition, a story that after the Biblical Cain slew his brother Abel, that his offspring had intercourse with fallen angels and birthed monsters. This is where the tales of the Nephilim hail from, as well as other monstrous progeny like vampires, demons, cyclops, giants, and the like. Many theories base Grendel's mother as either a descendant of Cain; a Disir, Norse fate goddesses; or a warrior woman. So far, the only consensus is that she and Grendel were both humanoid in appearance and let's leave it at that for now.

For my rendition of Part one of a Two part creation, I based my interpretation on the Robert Zemeckis film Beowulf, where they portrayed Grendel's mom as a seducer who promises power to men in exchange for a child, so I designed her in an attractive form , like the old school role of female seducers of tales past. I gave her exotic patterns that serve to contrast her dark skin and her aspect of an elf based on the ideas that she represented an earth spirit or a dark elf in Norse mythos. Also, I apologize to anyone who is sensitive to nudity, as I feel a lot of monsters would not care much for clothing, but this an interpretation, judge me as you see fit. It will not matter.